You are here: Home / Senza categoria / Tensions continue in Libya 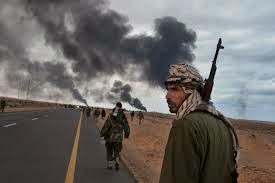 The shooting of a Coptic Egyptian family in Libya was just one issue of deep concern for the Egyptian and Libyan foreign ministers at a meeting this week against a backdrop of continuing tensions in the country, reports Doaa El-Bey.

In the meeting between Egyptian Foreign Minister Sameh Shoukri and his Libyan counterpart Mohamed Al-Dairi in Cairo, the Libyan official offered the condolences of the Libyan government for the “heinous terrorist act” that left three Egyptians dead in Libya.

He added that “terrorist elements” had also killed 14 soldiers at the time of the incident.

Of the repeated attacks against Egyptians in Libya, Al-Dairi said that “terrorism targets Libyans almost daily, and we are sorry that some acts have also taken place against our Egyptian brothers.”

“We are exerting our utmost efforts to restore security in Benghazi, something that will benefit Egyptians and Libyans alike,” he said in the press conference following the meeting.

An Egyptian doctor and his wife were killed and their daughter abducted in Sirte on 23 December. The body of the daughter was found two days after the attack, but the assailants have not been identified, according to the Libyan media.

Egypt’s Foreign Ministry has stated that it is investigating the events in touch with the Libyan authorities.
At the meeting in Cairo, Shoukri expressed his thanks to the Libyan authorities for the way they had handled the tragic attack. However, he also expressed “deep concerns” over the conflict in Libya and its implications for the country’s future, reiterating Egypt’s support for the legitimate Libyan government in the face of terrorism.

“Egypt backs the Libyan legitimate institutions and their capabilities to serve the Libyan people,” Shoukri said at the press conference.

Shoukri and Al-Dairi also discussed the initiative of the UN special representative for Libya, Bernardino Leon, who is seeking to convene a national forum for dialogue to end the conflict in the country on 5 January.
Libya currently has two parallel governments, the first of which is the internationally-recognised House of Representatives and cabinet of Prime Minister Abdullah Al-Thani based in the eastern port city of Tobruk that is backed by Egypt and the international community.

The General National Congress was Libya’s official legislature until the June 2014 elections, after which it was supposed to be disbanded and replaced by the new House of Representatives.

But politicians from the Islamist parties who performed poorly in the elections refused to acknowledge their defeat, citing voting irregularities and a low turnout amid the country’s deepening civil conflict.

They then set up a new General National Congress led by the Justice and Construction Party, the political arm of the Libyan branch of the Muslim Brotherhood.

As a result of the continuing conflict in Libya, Egypt’s Foreign Ministry has reiterated its call for Egyptians residing in Libya to exert the utmost caution and to stay away from places where clashes are taking place. It has also issued several warning against travelling to Libya.

Many Egyptians have been the victims of the violence in Libya over the last few years since the uprising of February 2011. Last September, an Egyptian citizen was shot dead in Sirte after engaging in an argument with two armed men.

Earlier last year, nine Egyptian Christians were killed in different attacks in Benghazi, Libya’s second-largest city in the east of the country, in attacks apparently motivated by sectarianism.

The Libyan authorities have said that unknown assailants were responsible for the murders. In 2013, a number of incidents of the torture, kidnapping and deportation of Egyptian Christians accused of proselytising were reported.

Around 1.5 million Egyptians were employed in the oil-rich Libyan state prior to the 2011 uprisings in the region. The number of Egyptians working in Libya is reported to have significantly decreased since then after the toppling of former Libyan leader Muammar Gaddafi.

Last year also witnessed the abduction of five Egyptian diplomats in Tripoli. The kidnapping of the diplomats was said to have been in retaliation for the arrest of the head of the Libyan Revolutionary Chamber group, Shaaban Hadeya, also known as Abu Obayda Al-Zawi, in Alexandria during a visit to the city.

The Libyan Revolutionary Chamber is said to have been responsible for a number of bomb attacks in Libya and according to news sources was responsible for the kidnapping of Libyan prime minister Ali Zeidan in October 2013.

The Egyptian diplomats were set free two days later after Al-Zawi appeared on television to announce his own release by the Egyptian authorities.  But in response to the abductions, the Foreign Ministry withdrew a number of embassy staff from Tripoli and consular staff from Benghazi.

The embassy building has been subjected to attacks ever since.

This is not the first time that an Egyptian foreign mission has been attacked by terrorist groups. In 1995 the Egyptian embassy in Islamabad was bombed by Al-Qaeda, leaving 15 dead and 60 injured.

Ten years later, Ehab Al-Sherif, Egypt’s ambassador to Iraq, was kidnapped and murdered by an Al-Qaeda affiliated group. In 2010 the Egyptian embassy in Baghdad was the target of a bomb attack that left 17 dead and more than 200 injured. Al-Qaeda also claimed responsibility for the attack.

Libya has so far failed to integrate the disparate rebel groups that helped topple Gaddafi into some kind of political settlement.

In eastern Libya radical Islamists have been accused of launching dozens of attacks on security forces and western interests in and around Benghazi, and the Libyan-Egyptian border has long been a crossing point for smuggled weapons and the movement of extremists.