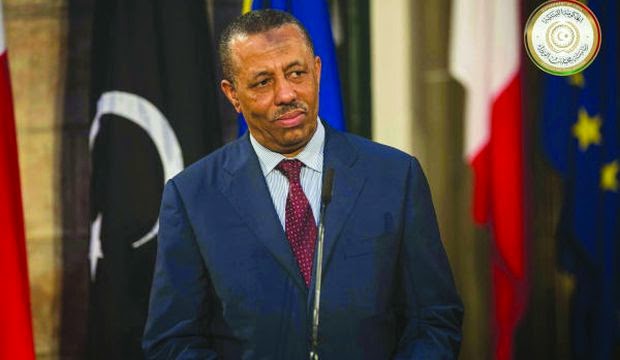 A Libyan official has revealed to Asharq Al-Awsat that Libyan interim Prime Minister Abdullah Al-Thani may consider resigning from his position, with an “undeclared battle” to succeed him raging behind-the-scenes among members of the parliament.

Speaking on the condition of anonymity a member of Thani’s cabinet told Asharq Al-Awsat that the Libyan PM “wishes to withdraw quietly from political action as he is exhausted and working in an extremely tough atmosphere.”

Despite the PM’s reluctance to take such a decision, the minister said, a power struggle on who will replace Thani is currently taking place within the Tobruk-based parliament, which is the internationally recognized authority in the country.

He said: “At least five candidates are secretly competing to succeed Thani, with each claiming to be the most popular among the parliament’s members.”

A former defense minister, Thani was appointed as the acting prime minister in March to replace Ali Zeidan who was ousted from office by a no-confidence vote in the Libyan General National Congress (GNC).

During his tenure, the North African country has become increasingly polarized, culminating in the emergence of a rival government. The competing Islamist-led government installed its own prime minister and reinstated the outgoing GNC after some of its members refused to recognize the newly-elected cabinet.

In August an Islamist militia, known as Libyan Dawn, stormed the capital Tripoli and its airport, forcing Thani to relocate his parliament to the eastern city of Tobruk.

Libya has descended into violence as rivals remain locked in a fierce struggle for power and oil revenues.

Libyan Dawn fighters launched a series of rocket attacks on some of the country’s largest oil terminals in late December, setting oil tanks alight for days and causing oil production to plummet. Libyan volunteers are still struggling to extinguish the flames engulfing the oil tanks in Sidra and Ras Lanuf ports.

A member of the Tobruk parliament, widely seen as a contender for the position of prime minister, told Asharq Al-Awsat that he is trying to persuade MPs to back him in his bid “in case he [Thani] decides to step down.”

The minister denied the existence of fundamental differences between Thani and the powerful General Khalifa Haftar with whom the Tobruk government formed an alliance to fight Islamist militias.

Haftar, who returned to Libya from his US exile to participate in the armed uprising against Muammar Gaddafi’s regime in 2011, has made significant gains against Islamists in the eastern city of Benghazi.

He was accused of attempting a military coup after ordering the then-ruling GNC to dissolve when it attempted to extend its term in office in February. In May he launched a military campaign, dubbed “Operation Dignity,” against radical militias.

“The two men [Thani and Haftar] have overcome their differences at this time for the public good but there continue to be some personal issues disrupting the improvement of ties between them,” the official added.

Meanwhile, French Defense Minister Jean-Yves Le Drian on Wednesday called on the international community to act to prevent Libya from becoming a “sanctuary for terrorists.”

In a New Year’s visit to N’Djamena, the capital of Chad, which borders Libya, Le Drian told French troops that “it will be a serious mistake for the international community to remain passive in the face of the growth of such a hotbed of terrorism in the heart of the Mediterranean.”

The minister’s call came as the UN Special Envoy to Libya prepares to hold a fresh round of peace talks between rival factions to end months of instability and violence.