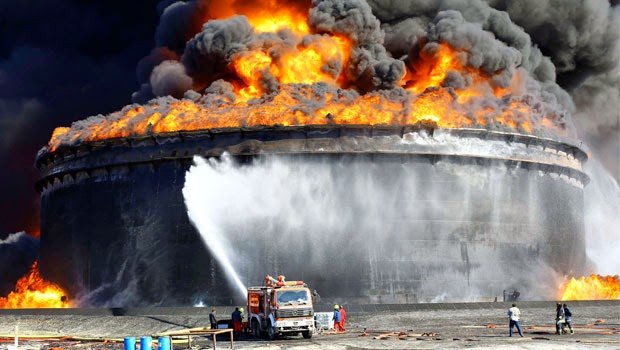 A Libyan jet shot down a militia helicopter on Tuesday after militia fighters launched air strikes on a key oil terminal in the east of the country, a military spokesman said.
Fighters from the Fajr Libya (Libya Dawn) coalition of militias, which controls much of Tripoli, as well as second and third cities Benghazi and Misrata, have been trying to seize Al Sidra oil terminal.
Militia aircraft, including the helicopter, attacked pro-government forces deployed in the so-called “oil crescent” eastern region around Al Sidra, said spokesman Ali Al Hassi.
“The air force shot down the helicopter as it prepared to land at a military base near Sirte airport, after it had taken part with other aircraft in the air raids,” Hassi said.
There were no immediate reports of casualties.
Fajr Libya has been trying to take Al Sidra and the nearby Ras Lanuf terminal since Thursday, when it killed at least 22 soldiers in a surprise attack by speedboat.
Seven oil tanks at Al Sidra were set on fire as a result of the fighting. On Sunday, firefighters managed to extinguish the blazes at four of them and put out another fire on Monday.
There are 19 tanks at Al Sidra, and two of them are still ablaze, raising concern that if the fires are not brought under control they could spread and disrupt Libya’s key oil industry.
On Monday, Libya’s internationally recognised government approved a $6 million (4.9 million euro) deal with a US firm that will send experts to extinguish the fires, a statement said.
Libya’s oil production has dropped to less than 350,000 barrels per day since clashes first erupted around the export terminals on December 13, from 800,000 previously, industry experts say.
The fighting has alarmed investors, who are concerned about possible disruptions.
On Sunday, pro-government forces raided the militia-held city of Misrata, after a Fajr Libya launched a new assault on Al Sidra.
More than three years after leader Muammar Gaddafi was toppled and killed in a Nato-backed revolt, Libya remains awash with weapons and powerful militias, and has rival parliaments and governments.
The internationally recognised parliament and government have taken refuge in the eastern city of Tobruk.
On Tuesday, a car bomb exploded outside parliament’s headquarters in Tobruk, injuring some passersby, a spokesman for the legislature said.
Faraj Buhashem said the car exploded
near the back gate of Dar Al Salam Hotel, where the parliament has set up its temporary headquarters.
“There was broken glass and some pedestrians were injured,” he said, adding that lawmakers had been meeting in a ground floor room and were unhurt.
But another parliamentary source said that lawmaker Mohamed Warfalli was slightly hurt in the face by flying glass.
Source:  timesofoman