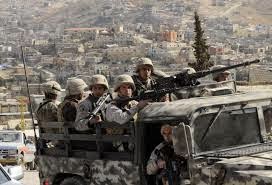 Islamic State militants holed up in the Qalamoun mountains on the Syrian-Lebanese border are seeking to gain control of nearby Lebanese villages to support their fighting positions, the head of Lebanon’s main security apparatus told Reuters.

Major General Abbas Ibrahim said Lebanese forces were on high alert to prevent the hardline militants from seizing any Lebanese territory near the Qalamoun mountains, which demarcate Lebanon’s eastern border with Syria.

Such crossborder incursions would add to concern that Lebanon, which suffered its own civil war in 1975-90, could be drawn further into the conflict in neighbouring Syria.

Fighting from Syria has regularly spilled into Lebanon since the war erupted nearly four years ago. In 2014, Islamic State and Syria’s al Qaeda wing attacked the border town of Arsal and took Lebanese soldiers captive. Gunmen including militants linked to Islamic State also clashed with the army in the coastal city of Tripoli.

Ibrahim, who is the head of Lebanon’s General Security office, said Islamic State had recently boosted its numbers in the Qalamoun area with the aim of securing crossborder territory to support its Syrian operations.
“Islamic State does not want to dominate Qalamoun … but they want to use it to secure their backs in the region through controlling (Lebanese) villages in contact with the Qalamoun area,” he said.

“The (Lebanese) military and security forces are on full alert,” he told Reuters at his village home in southern Lebanon.

Islamic State controls land in Syria and Iraq and has declared an Islamic caliphate. The group is being targeted by U.S.-led strikes in both countries.

Ibrahim said Islamic State had become the dominant armed group in Qalamoun. “In the recent period about 700 new fighters pledged allegiance, and so they are now more than 1,000 fighters,” he said.

Fighting has escalated in Qalamoun and other areas along the border since the summer, pitting Islamic State and other insurgents against forces fighting on behalf the Syrian government.

Sunni Islamist militants attacked strongholds of Shi’ite group Hezbollah in Lebanon several times in 2014. Hezbollah has sent thousands of its fighters to battle on the side of Syrian President Bashar al-Assad.

Referring to Islamic State and other militant groups like Nusra Front, the Lebanese army chief warned in November that Lebanon was facing “the most dangerous terrorist plot in the whole region”. Lebanese residents near the border have said they are ready to take up arms to defend their homes.

Ibrahim, who narrowly escaped a suicide bombing in June, said the security services had arrested many militants in broad security sweeps across the country and dismantled networks of fighters in operations that it did not always publicise.