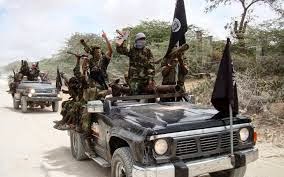 Somalia Al Shabab militants attacked a military base in the outskirts of the town of Baidoa on Friday morning, killing at least seven soldiers, a Somali military official said.

The attack came two days after the United States said it had killed the chief of al Shabaab’s intelligence and security wing, Tahliil Abdishakur, in a drone strike.

A spokesman for Al Qaeda-linked Al Shabab said the group had briefly seized the base and killed more than 10 soldiers.

Al Shabab often cites a higher death toll than the number given by officials.

In a separate incident in central Somalia on Friday, Al Shabaab ambushed a government convoy carrying food aid, killing one soldier, according to Somali officials.

A spokesman for Al Shabab confirmed the group was behind the attack. Eight gunmen infiltrated the main African Union (AU) base in Mogadishu last week and killed three peacekeepers and a civilian contractor.

Al Shabab claimed responsibility for the attack, which lasted several hours, and said it had killed 14 peacekeepers. Witnesses reported hearing bomb blasts and volleys of gunfire through the day.

The raid showed Al Shabab’s ability to carry out high-profile attacks in the capital even as it is losing territory in rural areas to AU peacekeepers who have launched two major offensives this year.

“The terrorists, some of whom were disguised in Somali National Army uniforms, breached the base camp around lunch hour and attempted to gain access to critical infrastructure, during which five of them were killed and three others captured,” the AU peacekeeping mission in Somalia, AMISOM, said in a statement.

It did not disclose the nationalities of the peacekeepers and civilian contractor killed in the attack.