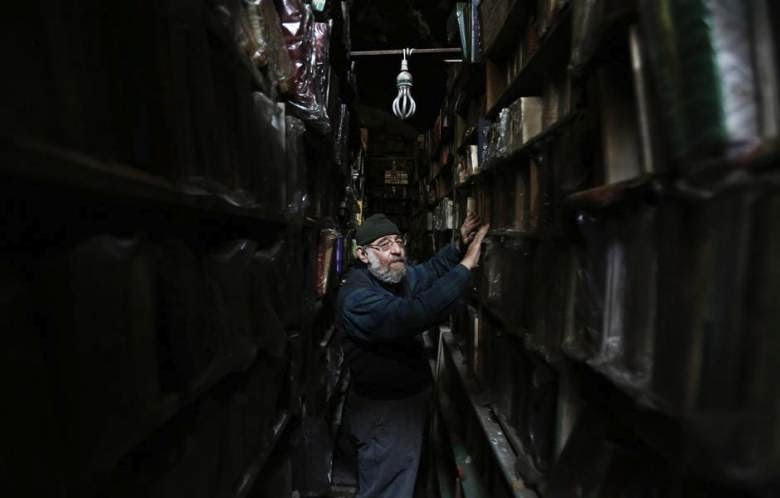 Kafana Samtan, or “Enough Silence,” reopened Saturday Tripoli’s famed al-Saeh Library, Lebanon’s second largest and home to some 100,000 books, exactly one year after it was set ablaze by unidentified assailants.

On January 3, 2014, the decades-old library was torched and its owner, Father Ibrahim Sarrouj, a Greek Orthodox priest, was assaulted.

Located in the historic heart of the Lebanese city of Tripoli, the antiquarian bookshop contains hundreds of books, including rare first editions of scholarly texts and out-of-print magazines.

An untold number of books were destroyed as Civil Defense teams struggled to put out the flames which engulfed one of Lebanon’s most renowned libraries late at night.

According to AFP, two thirds of some 80,000 irreplaceable ancient Muslim and Christian texts and manuscripts were destroyed.

Within hours after Father Sarrouj’s books went up in flames, Lebanese from different religious and political backgrounds flocked to the site and politicians raced to denounce the attack.

Few days after the attack, Kafana Samtan launched a fundraising inititaive to repair the library on Zoomaal, an online Arab crowdfunding platform, and was able just one month later, thanks to 298 donors, to collect US $35,000.

Addressing some 100 Tripoli residents who attended Saturday’s reopening ceremony, Father Sarrouj thanked Kafana Samtan, civil-society groups, and all the young men and women who helped replenish and rebuild his library, praising the positive role the people of Tripoli played.

Moreover, a short film directed by Lida Kabara, a Tripoli resident, was shown during the ceremony, in addition to statements by those who took part in the fundraising campaign.

Sources told Al-Akhbar at the time that the attack was prompted by rumors spread by Salafi youths about the discovery of polemical writings insulting to Islam inside one of the books at the library. Another rumor was that Father Sarrouj authored an incendiary pamphlet about the Prophet Muhammad.

The attack, meanwhile, came amid a backdrop of growing religious radicalism and sectarian tensions in Lebanon related to the war in neighboring Syria. In October, Tripoli was the scene of one of the deadliest spillover of fighting in the almost four-year war in Syria.

Trying to hide his broken spirit under his usual smile, father Sarrouj talked about Palestine, pan-Arabism, and progressive revolutions in the world. He said he aspired to a new flock of activists who will liberate Palestine.

“All this will turn into a roaring river that would sweep away Israel. Never mind this fanaticism – I know Tripoli quite well. This is our city, and these are our young men” said Father Sarrouj.
Source:  al-akhbar