You are here: Home / Africa / Somalia: Al-Shabab makes a murderous bid to grab the world’s attention 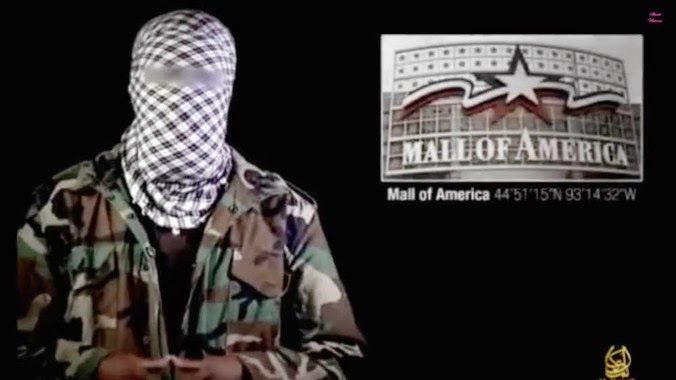 A propaganda video released by Somali militant group al-Shabab, threatening attacks against shopping centres in the West, smacks of a bid to remain relevant as other extremist groups such as the Islamic State and Boko Haram grab the world’s attention.

The slickly produced 77-minute film, posted online this past weekend, calls for strikes on shopping streets and malls in London, the United States and Canada. “Westgate was just the beginning,” it proclaims, invoking what might cynically be described as al-Shabab’s greatest hit: the siege of the Westgate mall in Nairobi, Kenya, in which 67 people were killed by four gunmen.

But that was September 2013 and a great deal has happened since. The Islamic State has overrun swaths of Iraq and Syria and produced macabre videos tailored to the modern media cycle. Boko Haram has rampaged through northern Nigeria and stolen headlines with the kidnapping of 276 schoolgirls. Islamist gunmen stunned the world by attacking a Paris satirical magazine, killing 17 people over three days.

In the perverse battle for eyeballs and retweets, al-Shabab’s public relations department has been outwitted by its rivals and has lost territory after a hammering by US drones and African soldiers. Last September, its leader, Ahmed Abdi Godane, was killed in a US air strike, but his successor, Ahmad Umar Abu Ubaidah, has so far failed to establish a similarly high profile.

There are two ways for al-Shabab, an affiliate of al-Qaeda, to put itself back on the global agenda. One was seen last Friday with the suicide bombing of a Mogadishu hotel, killing 25 people and injuring more than 40 and denting hopes that the capital has unstoppable momentum with new business, a construction boom and a returning diaspora.

Boko Haram used “copycat tactics” by declaring an Islamic caliphate in northern Nigeria, but that option is not open to al-Shabab since its recent setbacks on the battlefield.

Anton du Plessis, managing director of the Institute for Security Studies, warns of the continuing potential for lone-wolf attacks. “Although they are on the back foot and have suffered losses, they are still a force to be reckoned with. Nobody knows the extent of their sympathisers in other countries.”

Though al-Shabab has carried out attacks in neighbouring Kenya, Uganda and Djibouti, which all contribute troops to the African Union force in Somalia, it has not operated outside East Africa and the Horn of Africa. Yet Minnesota, home to the biggest Somali population in the US, has been singled out by terrorist recruiters, according to Associated Press.

Since 2007, it said, more than 22 Somali men from Minnesota have travelled to Somalia to join al-Shabab, and a handful of Minnesota residents have gone to Syria to fight within the last year. At least one Minnesotan has died while fighting for the Islamic State.

Cedric Barnes, Horn of Africa project director at the International Crisis Group, says: “This video has a lot to do with recruitment. It is propaganda but it’s also a recruiting tool. There is now competition for radical young Muslims in the West: rather than al-Shabab, they might go for the immediacy of the Islamic State in Iraq or Syria. There are more rivals than there were.”

Stig Jarle Hansen, an academic on al-Shabab in Somalia, notes the group has “never staged an attack in a country that was not a part of the African Union forces fighting them. The most likely scenario is that this continues, but al-Shabab propaganda is professional; it might inspire sympathisers to act.”