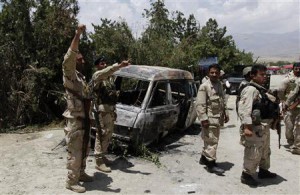 Taliban fighters killed 18 Afghan soldiers — including some who were beheaded — after storming an army outpost in the remote mountainous northeast in a major attack before the spring fighting season, officials said PT.com.

The attack in the Jurm district of Badakhshan province on Friday also left around a dozen soldiers missing, fuelling speculation that they had been captured by insurgents.

“Our rescue operations are continuing to track down and bring back the security forces who went missing in the assault.”

The defence ministry confirmed the incident in a statement and said the fighting left a total of 33 Afghan soldiers dead, wounded or missing.

The Taliban claimed responsibility for the attack.

Afghanistan is bracing for what is expected to be a bloody summer push by the Taliban, set to be the first fighting season in which Afghan security forces will battle insurgents without full NATO support.

Taliban insurgents have stepped up attacks on government and foreign targets since Washington last month announced a delay in US troop withdrawals from Afghanistan.

NATO’s combat mission formally ended in December but a small follow-up foreign force has stayed on to train and support local security forces.