You are here: Home / Senza categoria / More warnings about ‘terrorist threat’ in Libya 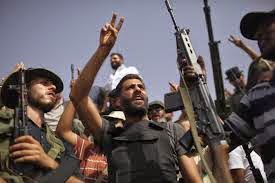 There are new warnings about the threat of radical Islamist groups in Libya and also calls for foreign intervention. Several groups in Libya have pledged allegiance to the Islamic State.

Abdoulaye Diop, the foreign minister of Mali, called for foreign intervention in Libya “to combat the spread of terrorism in the Sahel region of Africa and restore a central government”. Diop claimed that “as long as a solution is not found to the Libyan crisis almost everything that we are doing in Mali and throughout the Sahel more broadly speaking will continue to be threatened.” Diop said that an international force should be set up “to neutralize the armed groups” but also to promote national reconciliation and set up stable democratic institutions in Libya.
There are two rival governments in Libya. The internationally-recognized government is located in the eastern city of Tobruk with prime minister Abdullah al-Thinni and a competing government in Tripoli with prime minister Omar al-Hassi. The Tobruk government is supported by forces loyal to CIA-linked General Khalifa Haftar, while the Tripoli government is supported by various anti-government militias including some associated with radical Islamists. It seems unlikely that any foreign intervention would involve disarming Haftar’s militia which are now regarded as part of the Libyan armed forces. Any intervention will probably be directed against the forces allied with the Tripoli government.
On November 6, the Libyan Supreme Court ruled that the June elections in Libya last year were unconstitutional and that the Tobruk parliament should be dissolved. The Tobruk government rejected the ruling and most governments have ignored the ruling. Diop noted that problems with rebels taking over northern Mali were in part a result of fighters such as the Tuareg who had supported Gadaffi returning to northern Mali and starting a rebellion.
If there are attempts to disarm radical Islamists allied with the Tripoli government this could result in the same type of migration out of Libya into other countries in the Sahel area such as Mali, hardly a solution to the problem that Diop pointed out. Diop was particularly concerned about a group in the south of Libya allegedly allied with the Islamic State. The group executed 14 soldiers loyal to the Tobruk government near the southern city of Sabha according to a statement by the Tobruk government. A website calling itself the Islamic State in Libya claimed that it had killed 12 soldiers at the same location and even posted a photo said to show the execution of one of the soldiers.
The rival Tripoli government condemned the killings. The port of Derna in eastern Libya has also some radical Islamists who have pledged allegiance to the Islamic State. These types of developments help advance the increasingly prevalent narrative that Libya is now becoming a threat to the whole region and that there needs to be foreign intervention. While the Tobruk government has not asked for direct foreign intervention it has asked that an arms embargo be lifted so that the government to help fight what it calls terrorists.
As with the late Colonel Gadaffi any opponents of the government are termed terrorists. Lifting the arms embargo could only help one side in the conflict, the militia of General Haftar which are now part of the Libyan armed forces. In effect it would be clearly aiding one party in what is now a civil war. France meanwhile says it will bomb any jihadists crossing the border from southern Libya into other parts of the Sahel. French president Hollande said: “We are making sure to contain the terrorism that took refuge there, in southern Libya. But France will not intervene in Libya because it’s up to the international community to take its responsibility.”
The UN has been trying to broker a dialogue between the two rival governments but with the continued clashes there seems little hope of a meeting between the groups let alone a political solution to the conflict. The last international flights have now been ended after the internationally-recognized government attacked the airport in Misrata and also the one functioning airport in Tripoli. The same government also recently attacked a Greek freighter in the port of Derna killing two crew members and wounding two other. Even the US has issued a statement condemning that attack.
Source: digitaljournal