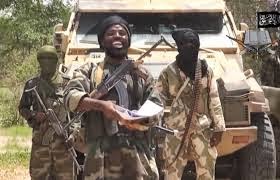 Boko Haram launched renewed attacks around a captured town in restive northeast Nigeria this week, razing at least 16 towns and villages, a local government and a union official told AFP.

“They burnt to the ground all the 16 towns and villages including Baga, Dorn-Baga, Mile 4, Mile 3, Kauyen Kuros and Bunduram,” said Musa Bukar, head of the Kukawa local government in Borno state.

More than 2,000 people are unaccounted for after radical Islamist sect Boko Haram torched more 16 towns and villages in Nigeria, a local lawmaker told NBC News. Ahmed Khalifa, a senator for Borno state where the attack happened, said the militants razed the town of Baga as well as “10-to-20” other communities in the country’s rural northeast over the past five days. “These towns are just gone, burned down,” he told NBC News via telephone. “The whole area is covered in bodies.”
Zanna said he had spoken to residents who fled the towns. They reported that the spree had been ongoing since Boko Haram overran a nearby military base Saturday. During the days-long assault, the militants chased people out of Baga before returning to kill those left and torch the buildings to the ground, according to survivors who contacted Zanna.
Some of those who survived fled on foot the 100 miles south to Maidurguri. The BBC spoke to Musa Alhaji Bukar, a senior government official in the area, who also said that 2,000 people had been killed in the raids. “This is one of the worst attacks I’ve seen because so many people are unaccounted for and feared dead,” said Zanna, who was elected in 2011.

Abubakar Gamandi, head of Borno’s fish traders union and a Baga native, confirmed the attacks, which happened Wednesday, adding that hundreds of people who fled were trapped on islands on Lake Chad.