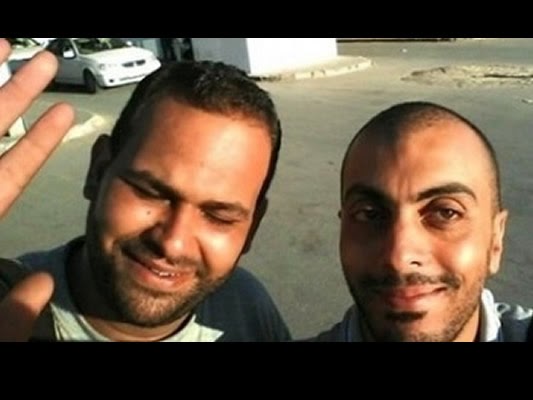 The Libyan branch of the Islamic State jihadist group claimed Thursday to have killed two Tunisian journalists who went missing in September.

In a statement released on jihadist websites showing images of Sofiene Chourabi and Nadhir Ktari, the group said it had “applied the law of Allah” against them.

In October, last year, Tunisian Prime Minister Mongi Hamdi urged Libya to locate two Tunisian journalists.
Investigative journalist Sofiene Chourabi and photographer Nadhir Ktari disappeared on September 8 in the eastern Libyan region of Ajdabiya.
According to media watchdog Reporters Without Borders (RSF), the pair were on assignment in Libya and were seized by a militia in the eastern city of Brega on September 6 but later released.
They disappeared again, probably seized by another armed group.
Libya has been rocked by violence and political instability since the 2011 NATO-backed uprising that toppled and killed veteran dictator Moamer Gathafi.
Two separate governments and rival parliaments are vying for power, as militias lock horns in deadly fighting in several parts of the North African country.
RSF last month called for the “immediate and unconditional release” of the two journalists.
Chourabi is the host and producer of the programme “Dossiyates” for Tunisia’s First TV, RSF said in September, and was investigating the situation on the Tunisian-Libyan border.
“I assigned Sofiene Chourabi the task of going to Libya to purse his investigation. Sofiene is an investigative journalist who is well known for his professionalism,” First TV chairman Kais Mabrouk told RSF.
Rival militias battled for Tripoli’s international airport this summer, shutting the facility and prompting an exodus of expatriates and migrant workers.
Thousands of them tried to flee across the border with Tunisia, where authorities allowed in only Libyan and Tunisian nationals unless they were only transiting the country.
Source:  middle-east-online