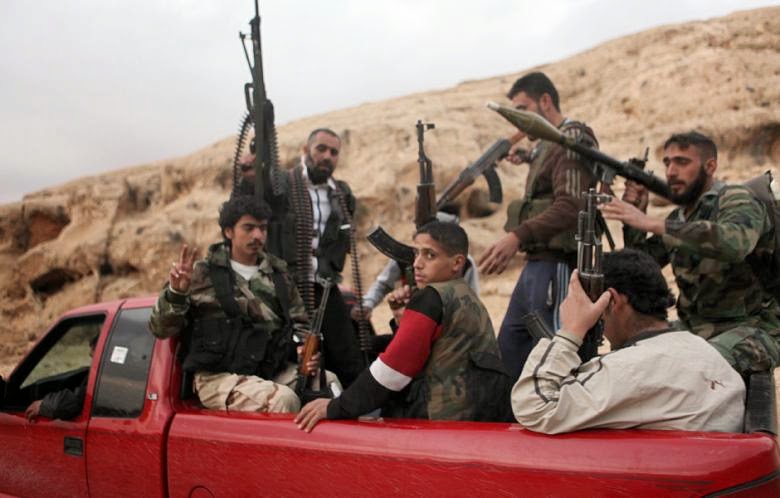 Spanning hundreds of square kilometers, from the Zabadani Mountains to the Halayem Mountains near Ras Baalbek, al-Qaa, and Ersal in Lebanon, through the Rankous plains, the “Islamic State of Qalamoun” is taking shape.

The two top jihadi organizations in Syria share power over these territories. The soldiers of Abu Bakr al-Baghdadi are laying the foundation for their state in preparation for what they call the “Incursion into Lebanon.”

There are only a few Lebanese Army checkpoints on the road to the barren areas of Ersal. The last landmark pointing to the Lebanese state is the army checkpoint in Wadi Hamid. Beyond it, you effectively become within the boundaries of the “Islamic State.”

The rulers of these barren mountains are the militants of the “Islamic State” (IS) and al-Nusra Front, who jointly govern this area. Two emirs share power over these mountains: the infamous emir of al-Nusra Front Abu Malik al-Talli, while a Jordanian jihadi named Abu al-Walid al-Maqdisi leads IS in Qalamoun.

Despite his young age, Maqdisi, 31, is known to be well versed in Sharia studies. In Qalamoun, the brothers in jihad – who have sanctioned each other’s blood across Syria – are committed to “preventing bloodshed” in their nascent state.

isitors of the area – including the families of the kidnapped soldiers, negotiators, and passersby – agree that the militants are in full control there. There is no presence of Syrian or Lebanese army personnel. The authority of the Lebanese state ends at the Wadi Hamid checkpoint, where the authority of the jihadis starts.

Not long after you bid farewell to Lebanese army soldiers and the Lebanese flag, you are received by “IS” jihadis and their black banners.

Despite the declared war between the leaderships of the two “states,” the fighters on the ground adhere to some kind of a truce, as long as neither violates the “borders” of the other.

According to Sheikh Hamza Hommos, the father of kidnapped Lebanese soldier Wael Hommos, the Lebanese army checkpoint prohibits passage to and from the barren areas between 5 pm and 5 am, citing security reasons. However, the road remains accessible to jihadis and passersby, who cross it stealthily, just a stone’s throw away from the official military checkpoint.

The checkpoint marks the end of the authority of the Lebanese state. In the “neighboring state,” there are homes belonging to people from Ersal, who have become Lebanese citizens living in limbo between two states, as they did between Lebanon and Syria. The only difference is that before 2011, they were the masters of the border.

In these rugged mountains, you pass by other checkpoints manned by fighters from the “neighboring state,” which the Lebanese call “Daesh.” They enjoy absolute authority here. Hundreds of fighters have turned these mountains into safe havens that protect them from bombardment.

They run patrols and seize “spoils,” including vehicles, fuels, and food supplies. They have established their own system to apply Islamic law. They believe it is the law of God, while many see it as an unjust law.

Although the fighters in the area are affiliated to various Islamist factions – including the Free Syrian Army (FSA) – the two strongest factions are ultimately al-Nusra Front and “IS.” These two groups share power and influence equally depending on the areas they control.

On the other hand, “IS” controls vast areas that include most of the Ersal barren areas (from Ajram to Wadi al-Zamrani – or the Halayem Mountains as shepherds call it – which includes Wadi Mira, an area that has been under recent bombardment by the Syrian army).

“IS” rejects the presence of groups that do not fall under its control within its territories, although “IS” militants now control the area adjacent to Ras Baalbek and al-Qaa, two Christian-majority Lebanese towns, which security services believe are under greatest threat of attack by jihadis.

It is fair to say that “IS” here is still in the preliminary preparation phase. Its leaders seek to recruit fighters before expanding at a later stage, as indicated by the fact that no military operations have been carried out by “IS” militants in Lebanon since the raid in Ersal in August 2014 – with the exception of battles they fought against FSA factions.

Will the expansion of “IS” towards Lebanon become a fait accompli, given the security reports saying that “IS” plans to attack villages in central Bekaa, where the group presumes to have a popular support base?
In an interview with Al-Akhbar,, Sheikh Mustafa Houjeiri – also known as Abu Taqiyya – downplays the possibility of an imminent threat to the villages of central Bekaa in the near future.

“It is no secret that the IS has been declaring almost daily that it will enter Lebanon in due time,” he said. Houjeiri rules out this possibility, saying that a major decision as such is taken by countries not groups. He adds that the areas adjacent to the villages of central Bekaa fall under the control of al-Nusra Front.

Will time prove Houjeiri right, or is “IS” – as did in Syria and Iraq – strategically and quietly preparing for an attack?

Lebanon is included in the map of the so-called “Islamic State.” The group led by Abu Bakr al-Baghdadi does not recognize national borders, and its followers were recently heard chanting the slogan, “From Diyala [Iraq] to Beirut.”