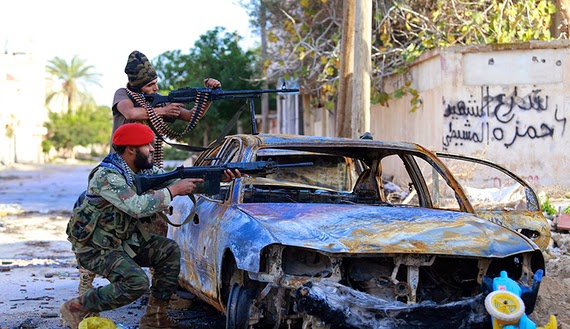 French Defense Minister Jean-Yves Le Drian has constantly warned against the increasing presence of extremist organizations and movements in southern Libya and about the area turning into a safe haven for groups the French army expelled from northern Mali last year. Senior US officials and some military leaders, like Gen. David Rodriguez, the US military commander in Africa, also warned against this “unprecedented” phenomenon.
Moreover, regional warnings [concerning the movement of groups] have been issued by Egypt, Algeria and Tunisia. Reportedly, Mokhtar Belmokhtar, an [Algerian] jihadist who settled in north Mali before moving to south Libya, executed the Amenas operation in south Algeria [in which an al-Qaeda-linked group affiliated with Belmokhtar took expat hostages at the Tigantourine gas facility in January 2013].Tunisian authorities believe that there are strong links between Jebel ech Chambi militants and the supporters of the Islamic State (IS) in south Libya. In Egypt, information indicates that terrorist groups in Sinai have received training and weapons in Libya.

Although Le Drian classified this phenomenon as the “most dangerous” because it goes against “the international system and its values,” no one has responded to his call for a quick military intervention in Libya. This includes French President Francois Hollande, who rejected the option for military intervention in Libya in an interview last Monday [Jan. 5]. This means that the “unprecedented phenomenon” is likely to expand and shake the stability of the Maghreb, which has not yet been marred by the “creative and destructive” chaos sweeping the Middle East.

A political solution for the Libyan crisis does not seem possible locally, under the current circumstances. The latest proof depicting its impossibility was the failure of the initiative of political dialogue launched by the UN special envoy in Ghadames.

Meanwhile, diplomatic action in favor of Libya is almost completely absent in Algeria, Egypt and Tunisia. Perhaps the only action taken was in the non-Arab, African neighborhood of Libya, as Chad’s president called for an urgent military intervention to prevent an extremist state from rising within the Libyan borders.

It has become known that IS in Libya and elsewhere seeks to lure African youth and some Chadians, especially in Arabized regions in this country. The Chadian calls [for intervention] did not receive any response, which means that the coast is clear for the establishment of a safe haven for IS militants in Libya.

Such a haven would threaten the neighboring countries and eliminate the borders, just like in Syria and Iraq. If IS succeeds in this regard, the Maghreb, just like the Levant, will face the same danger, and the phenomenon will have transcended all Arab borders without exception.

For those underestimating what is happening in south Libya, it is noteworthy that jihadist groups stationed in Darna and south Libya have the necessary means for mobilization, at the forefront of which is the ideological weapon that the Muslim Brotherhood cadres, IS and al-Qaeda members all retain. These groups also have financial means secured by oil smuggling in cooperation with local gangs that were formed during the siege on Libya in the nineties.

Moreover, they have become able to move freely with no surveillance after the collapse of the late Col. Moammar Gadhafi’s regime and thanks to tribal protection and a welcoming social environment. Perhaps the economic crisis has also supplied these groups with young fighters, and the open borders have provided them with jihad enthusiasts. Some of these groups also seek to open several fronts to disperse the efforts of the anti-IS international coalition and push it to stop its war on the organization.

The negative measures taken by some IS leaders in they regions they control have formed the only obstacle to the rise in fighters. These measures included destroying tombs and shrines, forcing women to wear the hijab, imposing prayer on pedestrians and forbidding women from moving around without a mahram [male escort]. According to reports from these areas, militants have apparently stopped destroying shrines temporarily and they are awaiting the right circumstances to resume this activity.

From this, we arrive at a very important conclusion on the future of our Arab world, which is threatened with destructive chaos in the Maghreb and the Levant and with IS expansion. The two factors are interrelated, as they are conditioned by one another. How can we face this threat, knowing that the Atlantic states that toppled the former Libyan regime cannot deal with the disastrous results of their intervention?

Several hypotheses should be examined to form a solution. One solution could be supporting the Libyan army, which is trying to control the country’s east, and isolating the militants in the south, while luring the moderates with significant political and economic gains to engage in the war against extremists. Moreover, Egypt, Algeria and Tunisia should coordinate to increase control over their borders and prevent the militants from moving to and from south Libya.

An Arab-African force under the command of the Libyan army should be formed to quickly intervene in Libya, and a national Libyan [political] initiative that includes all parties should be launched. Its absolute priority should be to maintain stability and security and restore the state’s regular tasks. The division of power among regions and parties can only happen when an authority capable of protecting shared wealth is established.

Perhaps the Libyans and Arabs should realize that the world can live normally while catastrophes wreck their countries. The world can protect itself from their dangers, which would only harm them at the end of the day. In these tough times, the Arab League is trying to address the Libyan challenge, and perhaps its support for the Tunisian-Egyptian-Algerian effort is its best shot to save Libya and the Arab world from an obvious and imminent disaster.