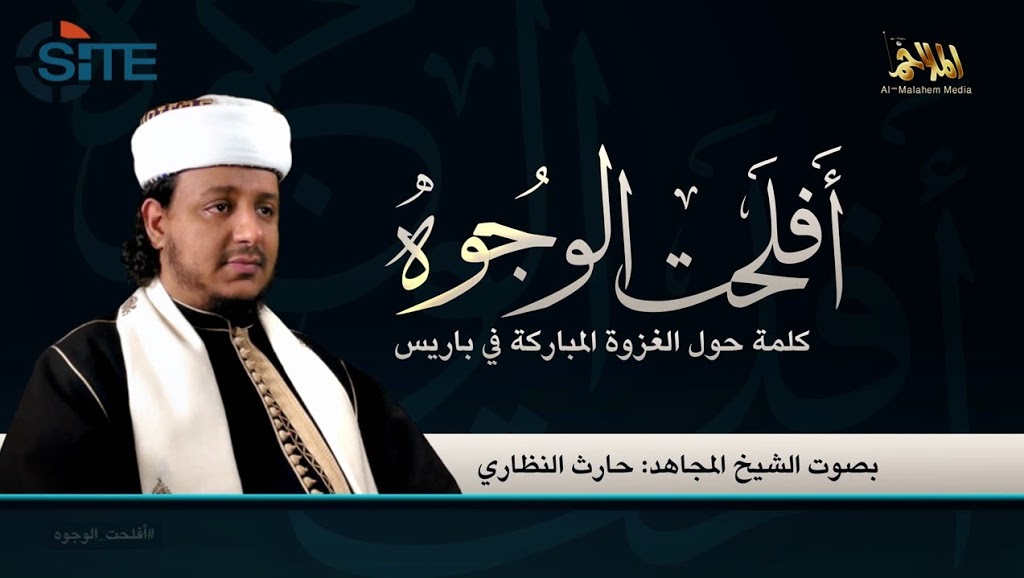 Al-Qaeda in the Arabian Peninsula (AQAP) released a speech from one of its top Shariah officials, Harith bin Ghazi al-Nadhari, speaking on the attack at the offices of Charlie Hebdo in Paris, France, and threatening France with more operations if it does not stop “fighting” Islam and its symbols, and Muslims.

His speech, entitled, “The Faces Succeeded,” came in a 5 minute, 37 second video uploaded on YouTube on January 9, 2015, hours after the suspected gunmen, Said and Cherif Kouachi, were killed by French police.

Nadhari stated: “Some of the sons of France were disrespectful to the prophets of Allah, so a group from among the believing soldiers of Allah marched unto them, then they taught them respect and the limit of the freedom of expression. Soldiers who love Allah and His messengers have come unto you, and they do not fear death but adore martyrdom in the cause of Allah.”

Following is a translation of the speech:
In the Name of Allah, the Most Gracious, the Most Merciful
The Faces Succeeded
A Word about the Blessed Invasion in Paris
By the Voice of the Mujahid Sheikh Harith al-Nadhari
Al-Malahem Media
Rabie al-Awwal 1436H / January 2015
Praise be to Allah, and then praise be to Allah. Allah is Great, and all praise is due to Allah.
O Allah, let the praise be to You, for You have sufficed for Your Prophet against the scoffers. Praise be to You. You have supported Your worshipers the mujahideen. Praise be to Allah.
O Allah, may Your prayers be upon he who You sent with the sword between the hands of the hour until You are worshiped alone, and he whose fame Your raised high, and expanded his chest and made him infallible among the people. And You made he who hates him to be cut off. O Allah, may Your prayers be upon Your slave and Prophet Muhammad ibn Abdullab ibn Abdulmutallab ibn Hashim, who You sent as a witness, a giver of glad tidings, a warner, and as one who invites to Allah by his leave and as a lamp spreading light, may Allah’s peace and blessings be upon him and his family. And thereafter:
The enemies of the Messenger of Allah who disbelieved in him, belied him, and harmed him, the filthy ones from among the sons of France, thought that Allah will not champion His Messenger, and thought that they are safe from the rule of Allah against them. They sat waiting and then they sat waiting, but Allah came to them from where they did not expect and got them and tortured them by the hands of the believers. [Qur’anic Verse]
Some of the sons of France were disrespectful to the prophets of Allah, so a group from among the believing soldiers of Allah marched unto them, then they taught them respect and the limit of the freedom of expression. Soldiers who love Allah and His messengers have come unto you, and they do not fear death but adore martyrdom in the cause of Allah.
{Poetry}
Allah has men who came after the Companions and take revenge and support Allah and His Messenger. Yes, by Allah. We surely will raise the Companions to defend the Messenger of Allah, and we will surely follow them in defending him. We have the example in Muhammad bin Maslamah, may Allah be pleased with him. If history knew ‘Aws and Khazraj, Allah has other ‘Aws and Khazraj.
O mujahideen heroes, the faces succeeded and the hands are appreciated. I wish I could be with you.
O Muslims, verily, waging jihad against the disbelievers has honor in this world and happiness in the hereafter. Then how come we do not fight those who harmed the Prophet, belittled the religion, and fought the believers? Allah said: [Qur’anic Verse]
France today is among the leaders of disbelief. It insults the prophets, belittles the religion, and fights the believers, and there was no deterrent for it but that which Allah ruled. [Qur’anic Verse]
O French people: When will you stop fighting Allah and His Messenger? If you convert to Islam it is better for you. [Qur’anic Verse]
O French people: It is better for you to stop your aggression against the Muslims, so perhaps you will live safely. If you refuse but to wage war, then wait for the glad tiding, for by Allah, you will not be blessed with security as long as you fight Allah and His Messenger, and you fight the believers. [Qur’anic Verse]
Praise be to Allah, the Lord of the Worlds.