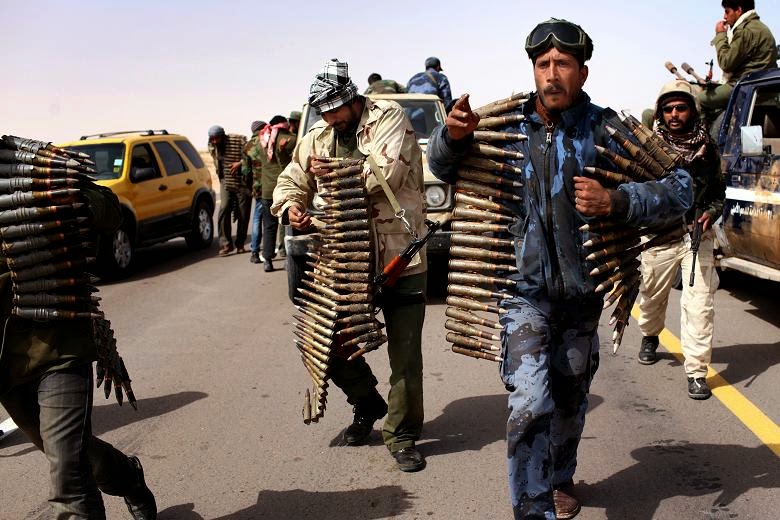 The talks sponsored by the United Nations between Libya’s warring factions scheduled for Jan. 5 were postponed. This new delay follows previous, repeatedly postponed attempts resulting from a lack of consensus on the agenda and who should take part in the talks. Meanwhile, events on the ground continue to change by the day, making it increasingly more difficult to reach agreement on certain details and technicalities.

Over the last four weeks, fighting has taken a serious turn, as Libya Dawn, a collation of Islamists and fighters from Misrata, attacked the biggest oil exporting terminal at Sidra, east of Sirte, setting at least five oil tanks ablaze and burning nearly 1 million barrels of crude oil, costing the country an estimated $1 billion.

On the other hand, the Libyan army, led by the recently reinstated Gen. Khalifa Hifter, retaliated with airstrikes, targeting logistical and militia targets in Misrata itself for the first time. This development sends a clear message to Libya Dawn leaders and Misrata militias that their hometown is not immune.

Since the recent violence erupted last July, hundreds of civilians have been killed and thousands more displaced. A UN report released Dec. 23 documents at least 450 deaths in Benghazi alone, while highlighting the broader destruction visited across the country by the warring groups. If anything, this indicates how difficult and complicated the task is for Bernardino Leon, head of the United Nations Support Mission in Libya (UNSMIL). The Spanish diplomat has visited Tripoli and Tobruk numerous times in his effort to get the two governments to agree on a dialogue to bring about a political settlement to Libya’s escalating crisis.

The fighting in Libya is increasingly becoming a proxy war between regional players vying for influence in the shattered, oil-rich country, which has been in turmoil since NATO intervened to help destroy the government of Moammar Gadhafi in 2011. This regional dimension of the crisis must be understood if any settlement is to be reached and spare the country from further bloodshed and destruction. By doing so, Leon must by now have realized that a local solution without international involvement is no longer possible. After four years of fighting and militia domination, Libya has passed the stage of finding its own cure to its political and security mess.

Sudan, Turkey and Qatar have joined forces, each for its own interest, to meddle in Libyan affairs. While Doha provides arms to the Islamists, Khartoum and Ankara provide political and logistical support to the illegitimate government set up by Libya Dawn in Tripoli after it conquered the capital in August. The trio has been acting within a broader strategy of helping Islamists in the region gain power.

On the other hand, Egypt, the United Arab Emirates and Saudi Arabia have been supporting the elected government, although not for Libya’s sake, but for their own purposes. Egypt is trying to make sure that its own fleeing extremists do not find safe harbor across its western border. The UAE and Saudi Arabia are acting within the broader regional context of countering the pro-Islamist Doha-Ankara axis.

Politically speaking, Leon’s mediation efforts will have little success unless he adjusts his plans accordingly. Of course, he can only count on the UN Security Council to help him and help salvage Libya, which the council helped destroy when it authorized the use of force in Resolution 1973 in March 2011.

Now might well be the right time for Leon to go back to the Security Council and urge it to find ways to enforce previous resolutions on Libya. Resolution 2174 is of particular importance as it spells out the use of sanctions against violators, be they individuals, groups or states. When adopted in August, it was hailed as a deterrent since it clearly threatened action, including referral to the International Criminal Court, against militia leaders and their backers. The sanctions committee is supposed to identify those behind the violence in Libya, but so far nothing has happened.

On Dec. 31, French Defense Minister Jean-Yves Le Drian warned, “It will be a serious mistake for the international community to remain passive in the face of the growth of a hotbed of terrorism in the heart of the Mediterranean,” referring to different terrorist groups having established themselves in the country. His warning came days after similar calls for action from Libya’s neighbors, in particular Niger, Tunisia and Chad.

On Jan. 5, however, French President Francois Hollande ruled out military intervention in Libya unless there is a “clear” mandate from the international community to help stabilize the country. He did say whether France intends to seek another mandate from the UN.

If France and other major powers are serious about finding a peaceful solution to the Libyan crisis, they must understand that Leon has no magic tricks and can only do what the Libyan factions are willing to accept when they are not coached by outsiders. This, of course, will not happen unless pressure is applied on the militias and individuals as required by Resolution 2174, which calls for accountability for those “responsible for violations or abuses of human rights or violations of international humanitarian law, including those involved in attacks targeting civilians.”

France and other permanent members of the Security Council are morally, if not legally, responsible for the mess in Libya and such responsibility would require reinforcing the appropriate UN resolutions already passed. One way of doing so is to make sure that the internationally recognized government and its army have the required capabilities to enforce the law across Libya and for regional countries to refrain from supplying arms and money to all illegal, armed groups. In fact, UN member states are still bound by Resolutions 1970 and 1973, passed in February and March 2011, respectively, prohibiting the supply of arms and ammunition to Libya.

The regional powers pursuing their own agendas in Libya will not, however, refrain from interfering in the country’s affairs unless the major powers, particularly the Security Council’s permanent members, clearly demand it and show willingness to take punitive measures against violating states.