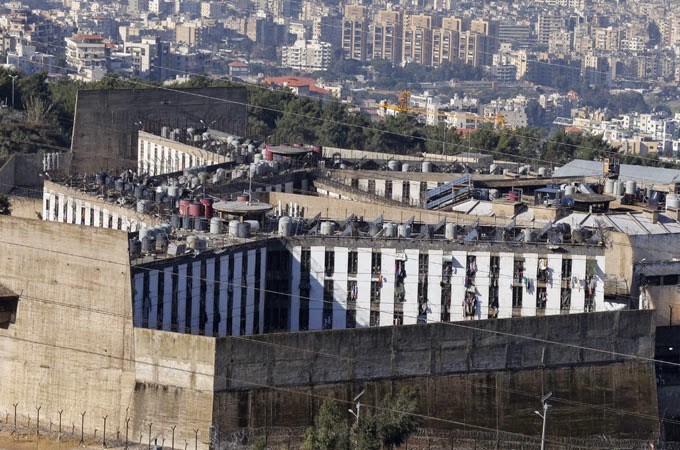 The Internal Security Forces (ISF), in a statement on Monday, said an operation was under way at the prison’s B block, where many prominent prisoners are held.

The block in Roumieh, east of the capital Beirut, is known as a virtual no-go zone for security forces, where prisoners have access to laptops, phones and money.

The ISF said some prisoners had rioted, starting fires to thwart the operation, which came after a double suicide bombing on Saturday in the Jabal Mohsen district of the northern city of Tripoli.

“The situation is under control and there are no casualties and the plan being implemented complements the overall security plan for Lebanon.

“Roumieh prison is part of that plan, especially after the discovery of ties between a number of prisoners and the terrorist blasts in the Jabal Mohsen area.”

The attack in Tripoli killed nine people in the neighbourhood which is inhabited mostly by members of the Alawite sect to which Syrian President Bashar al-Assad belongs.

Fighting has regularly broken out between residents of the neighbourhood, who largely back Assad’s government, and fighters in neighbouring Bab al-Tebbaneh, where residents back the Syrian uprising.

The Saturday attack was carried out by Lebanese Sunnis from another Tripoli district known for supporting the uprising.

It was claimed by al-Qaeda’s Syrian branch al-Nusra Front, which said it was revenge for two attacks against mosques in Tripoli in August 2013 that killed at least 45 people.

“As a result of the deterioration of security in Lebanon, you will hear about surprises regarding the fate of the prisoners we have,” the group said on one of their Twitter accounts.

Al-Nusra Front is believed to be holding the security personnel among a total of 30 who were kidnapped in the eastern border town of Arsal during fighting in August.

Another nine security personnel are being held by the Islamic State in Iraq and the Levant (ISIL) group, while one hostage died of wounds during the fighting in Arsal.

Four of those kidnapped have been executed – two of them by their al-Nusra Front captors – and negotiations for the release of the remaining hostages have stalled.