You are here: Home / Mediterranean / 6 suspected militants killed in North Sinai after militant attack on peacekeepers 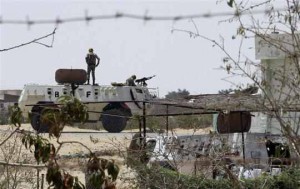 The source said the men in the vehicles were attempting to attack the peacekeepers’ camp with mortar shells. Those killed belonged to the Sinai-based Ansar Bayt al-Maqdis militant group.

Security sources meanwhile told Reuters that the militants fired rockets in the direction of the multinational peacekeepers, adding that no casualties were reported.

Ansar claimed responsibility for the attack on twitter accounts affiliated with the group. It said the attacks came in response to the arrest of a woman from Sinai’s Sheikh Zuweid region.

Militancy inside Egypt has seen a significant rise since the military ouster of Islamist president Mohamed Mursi in July 2013, which was prompted by mass protests against his rule. Most attacks occur in North Sinai, targeting security forces.

Ansar is Egypt’s most active militant group. It changed its name to Sinai Province last November after pledging allegiance to the Islamic State fighters in Syria and Iraq.

The armed forces has launched an intensified crackdown in the Sinai Peninsula in response to the militancy.

Armed forces spokesman Mohamed Samir said last week that a total of 141 suspected militants have been killed in North Sinai in the month of May.