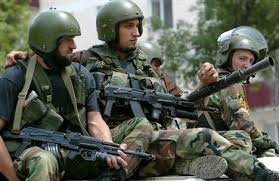 The Russian interior ministry says six people have been killed in the restive region of Dagestan in clashes with security forces.

Police spokeswoman Fatina Ubaidatova said Wednesday three militants were killed in the region’s capital, Makhachkala, and three more in the town of Izberbash, southeast of Makhachkala. Residents were evacuated from residential buildings in both towns where the suspects had holed up and opened fire with automatic weapons on the police.

The dead militants were suspected of various crimes including an attack on patrol officers and an attempt to blow up a railroad, the National Anti-Terrorism Committee said in a statement.