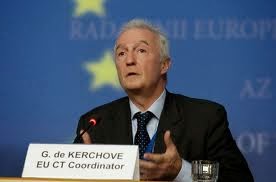 European Union counterterrorism chief Gilles de Kerchove told AFP yesterday that there was no absolute way to prevent new terror attacks like those in Paris.

“We can’t prevent (such attacks) 100 percent,” Kerchove said in an interview. He said the answer was not to jail jihadists returning to Europe from Syria and Iraq, as prisons had become “massive incubators” of radicalisation. “The threat remains serious,” said de Kerchove, who met with European, US and Canadian security ministers in Paris on Sunday after the Islamist attacks in the French capital last week in which 17 people were killed.

He said the Islamic State group, which is being attacked by US-led forces in Iraq and Syria, has said it wants to attack western targets while a “strongly degraded” Al-Qaeda wants to remain a force to be reckoned with. He warned that the Al-Nusra Front, the Al-Qaeda branch in Syria, is also looking for “clean skins,” Europeans with no record of radical activity, to mount attacks in Europe.

‘Wipe out IS’
Islamic State fighters must be wiped out, France’s defense minister said yesterday, indicating that Paris would not pull back from military operations overseas after 17 people were killed by home-grown militants in Paris last week.
After the United States, France has the largest number of planes and troops involved in the coalition fighting Islamic State, which last year took control of large swathes of Iraq and Syria. It also has about 3,500 troops and special forces operating in the Sahel- Sahara region hunting down Al-Qaedalinked militants. France intervened in Mali to oust Islamist militants from its former colony in January 2013 and Defens Minister Jean-Yves Le Drian noted that two years later French forces were now fighting the “same threat” on home soil. “It is the same enemy.
Our forces are on the ground here because … for our troops it’s the same fight,” Le Drian told Europe 1 radio, referring to the 10,000 soldiers being deployed across France to secure key sites following last week’s attack on the satirical newspaper Charlie Hebdo by Islamist gunmen. Parliament will vote later on Tuesday on whether to extend France’s military mission in Iraq, four months after its launch.
In a posthumous video, one of last week’s killers cited France’s operations abroad as one reason for his actions, but there have been no major calls in France for its troops to withdraw from operations against Islamic militants. “The response is inside and outside France. Islamic State is a terrorist army with fighters from everywhere … it is an international army that has to be wiped out and that is why we are part of the coalition,” Le Drian said. More than 1,120 French citizens are involved in jihadi cells linked to Iraq and Syria, of which about 400 are in the region.

The suspected female accomplice of one of the gunmen who attacked a Jewish supermarket last week fled to Syria ahead of the killings, Turkish officials said on Monday. France has 800 military personnel, nine fighter jets, a maritime patrol aircraft and a refuelling plane at its base in the United Arab Emirates as part of its “Chammal” Iraq mission, as well as an anti-aircraft warship in the Gulf. It also operates six Mirage fighter jets from Jordan.

It is due to send its aircraft carrier to the Indian Ocean today and Le Drian said in December Paris would send 120 military advisers to train Iraqi and Kurdish forces. However, it has ruled out striking the Islamic State in Syria, where it provides equipment and training to “moderate” forces fighting President Bashar Al-Assad. There was no indication of a change in that stance yesterday.