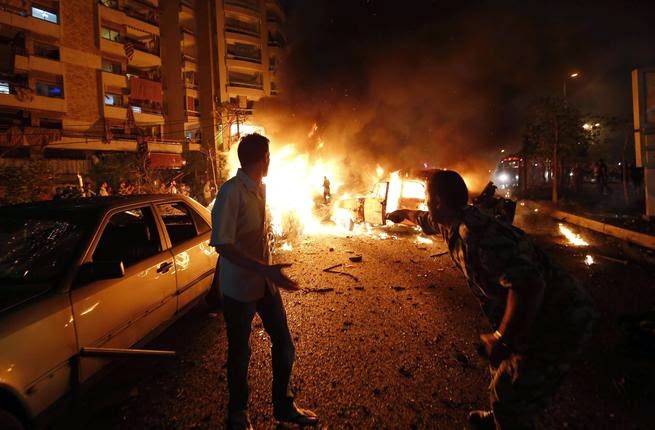 Up to 32 Lebanese youths are preparing to carry out suicide attacks inside Lebanon. The security services are tracking down around 200 suspects who might have links to al-Nusra Front (ANF) and Daesh, after the two groups decided to resume attacks in the country. Once again, Lebanon is vulnerable to devastating suicide attacks.

Suicide bombers Bilal Mohammed al-Mariyan and Taha Samir al-Khayal have reignited the spark of suicide attacks in Lebanon. According to security reports, Lebanon is now once again caught in the crucible of suicide bombings, and many security sources fear the country may be entering a dangerous phase. Jihadis are also talking about a heated next phase. This means that the suicide bombers that struck Jabal Mohsen will not be the last, but rather, they may be the opening salvo, or the “first rain,” according to an ANF source in Lebanon.

Interior Minister Nuhad al-Mashnouq had announced that the bombers were affiliated to Daesh, based on security reports linking them to Munther al-Hassan, a man suspected of distributing explosive vests. Hassan was killed during a raid by the Information Branch in Tripoli. However, Daesh has not claimed responsibility for the attack. Furthermore, the ANF source says the two men had pledged allegiance to ANF nearly a year ago. The source said, “Khayal comes from a non-religious family. His father is an informant for Lebanese security services.”

Either way, security reports indicate both Daesh and ANF intend to carry out attacks in Lebanon.
Oddly, the identity of the perpetrators of the twin bombing was revealed in the Lebanese media before ANF claimed responsibility for the attack and named the two men in messages exchanged with Anatolia News Agency. Moreover, ANF made the same mistake as the media in identifying the two suicide bombers, naming Khayal as “Kayyal.”

In parallel, security sources say there are reports a group of Lebanese suicide bombers have been recruited from various regions, primarily from Tripoli and Saida (Sidon). According to the same reports, it takes nearly a month to train and prepare a suicide bomber, bearing in mind that new recruits undergo training supervised by explosives experts.

The reports reveal that the man in charge of training Lebanese inghimassis [hybrid guerilla fighters-suicide bombers] is Lebanese national O.S. better known as Abu al-Farouq. The reports state the main goal of the planned attacks would be Shias and Alawis, or “Nusayris” as ANF and jihadis refer to them pejoratively.
This information is consistent with intelligence obtained by security services from their surveillance operations that focus on Lebanese nationals fighting in Syria, especially in Daesh-controlled regions. The security services have counted more than 200 IS-affiliated individuals who returned from Syria, and who are suspected to have come back in preparation for attacks in Lebanon.

Sources reckon that around 30 Lebanese youths have been assigned to carry out attacks in Lebanon. This coincides with a decision by Daesh to begin covert operations in Lebanon, according to the security sources. Some of the suspects have been identified while others linked to them or to recruitment networks have been arrested, the sources said.

In the meantime, leaks by ANF-affiliated jihadists corroborate reports regarding the return of dozens of fighters who were in Syria. However, jihadi sources make the distinction between two types of returnees, saying, “Some of the brethren left Syria to escape the fighting between Daesh and ANF, while others have been ordered to return.”

According to the same jihadi sources, “The orders were for them to return to operate in Lebanon.” “The order is for them to join sleeper cells until they are activated.” Regarding the reason why jihadi attacks had seen a hiatus in Lebanon, ANF sources say this was meant to “recruit, equip, and prepare, and learn lessons from previous experiences because operations in Lebanon are not based on mobile combat but on covert work at their core.”

On Sunday night, ANF posted on its official Twitter account a statement numbered 22, in which it officially claimed responsibility for the attack on a café in Jabal Mohsen. ANF wrote that the twin attack was to “avenge the bombing of al-Salam and al-Taqwa mosques and for letting criminals roam free.” The statement also said Bilal al-Mariyan raided the café and detonated his explosive vest against the “crowds of Nusayris present there,” while Taha al-Khayal waited a few minutes before he detonated his vest against “security elements who rushed to the scene of the first explosion.”