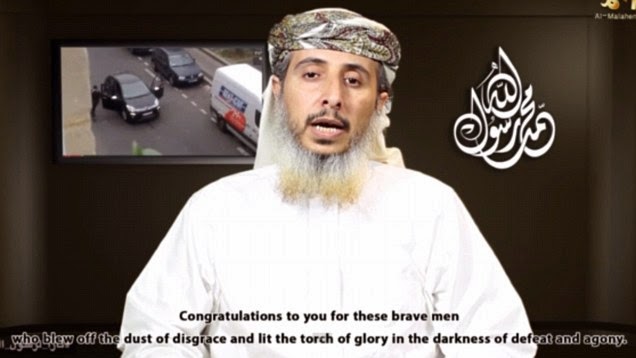 Jihadist movement says it carried out Paris assault as ‘vengeance for the prophet,’ warns of more attacks

A top leader of Yemen’s al-Qaeda branch claimed Wednesday responsibility for last week’s attack on a Paris newspaper when two masked gunmen killed 12 people, including much of the weekly’s editorial staff and two police officers.

Nasr al-Ansi, a top commander of Al-Qaeda in the Arabian Peninsula, or AQAP as the branch is known, appeared in an 11-minute Internet video, saying that the massacre at Charlie Hebdo was in “vengeance for the prophet.” The paper had published cartoons of the Prophet Muhammad, which is considered an insult in Islam.

“We, Al-Qaeda in the Arabian Peninsula, claim responsibility for this operation as vengeance for the messenger of Allah,” one of the group’s leaders, Nasser al-Ansi, said in the video.
Al-Ansi said France belongs to the “party of Satan” and warned of more “tragedies and terror.” He said Yemen’s al-Qaeda branch “chose the target, laid out the plan and financed the operation.”
Earlier in the day Charlie Hebdo released its first issue since the attack and that featured another cartoon of the Prophet Muhammed on the cover.
In defiance of the militants who killed its staff, Charlie Hebdo’s new edition had a cartoon of a tearful Muhammed on its front page holding a sign saying “Je suis Charlie” (“I am Charlie”).
He was shown under the ambiguous title “All is forgiven.” Cartoonist Renald “Luz” Luzier said he cried after drawing it.
Some followers of Islam feel any depiction of the prophet is sacrilege.
Over 3,000,000 copies of the magazine were published, more than 50 times as many as the weekly’s usual run of 60,000, yet in many areas of Paris the new issue was sold out within minutes.
At least one of the two brothers involved in the attack traveled to Yemen in 2011 and either received training from or fought alongside the local Al-Qaeda group, according to US and Yemeni officials.
A US intelligence assessment described to the AP shows that Said Kouachi was trained in preparation to return home and carry out an attack. Kouachi, and his brother Cherif, were both killed by police in a shootout two days after the assault on the magazine.
If confirmed, the attack would be the first time al-Qaeda’s branch in Yemen has successfully carried out an operation in the West after at least two earlier attempts.
Soon after the Paris attack the branch’s senior cleric Sheikh Harith al-Nadhari issued a recording on the group’s Twitter feed commenting on the “blessed raid on Paris.”
He denounced the “filthy” French and called them “the heads of infidelity who insult the prophets.” He praised the “hero mujahedeen” who he said “taught them a lesson and the limits of freedom of speech.”
Al-Nadhari stopped short of directly claiming responsibility for the attack at the time, but added, “How can we not fight those who hurt our prophet, slandered our religion and fought the faithful.”
Addressing the French, he said, “It better for you to stop striking Muslims so you can live in peace. But if you only wish for war, then rejoice, you will not enjoy peace as long as you wage war on God and his prophets and fight Muslims.”