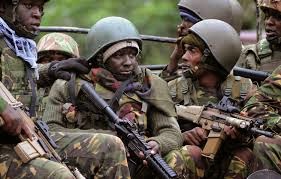 Kenyan soldiers on Wednesday killed five suspected members of Al-Shabaab in the coastal town of Lamu near the Kenya-Somalia border, said military officials.
Military spokesman Colonel David Obonyo said the insurgents ambushed the Kenya Defense Forces (KDF) operating under the Africa Union peacekeeping (AMISOM) troops when they identified the ambush site, about 6 km to Basuba in Lamu County.
“The troops were on their routine administrative duties when they identified the ambush site, a firefight ensued and five suspected Al-Shabaab militants were killed,” Obonyo said in a statement released in Nairobi.
The military spokesman said some of the militants escaped with injuries, and an operation in their pursuit was launched immediately.
“Regrettably, KDF lost a soldier in the incident and the three others who sustained minor injuries are being accorded the necessary medical attention,” said Obonyo, calling on residents in the area to inform the police of any people with gunshot wounds.
The militants have been hiding in the vast Boni forest in Lamu where they have been carrying out attacks on the residents and also ambush commuter buses along the border with Somalia.
The Kenyan authorities have declared Boni forest a prohibited area, and subsequently extended the curfew to allow security forces more time to flush the militants out of the area.