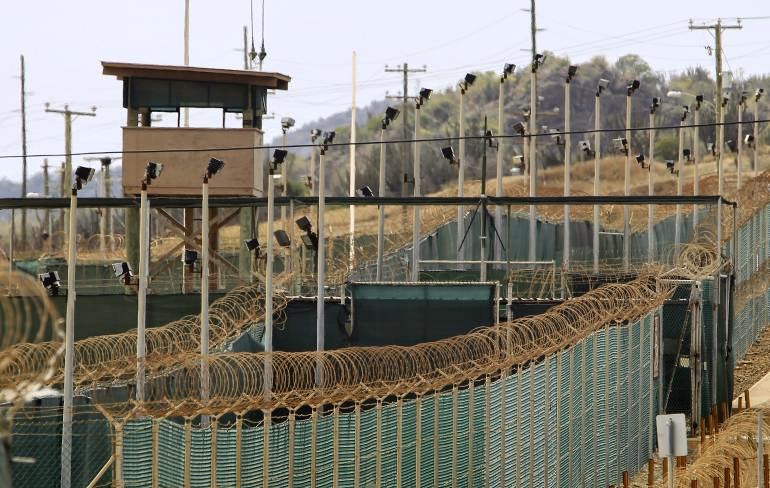 The attacks in Paris last week that killed 17 people and wounded dozens were inspired by al Qaeda in Yemen, the group’s leaders officially claimed Wednesday, but one of the main tools used to recruit the attackers, the treatment of detainees in Guantanamo Bay, is becoming less valuable, experts say.
Jihadi leaders from al Qaeda are now trying to find new ways to lure followers at the same rate as their competitors, the Islamic State group.
“The propaganda value of Guantanamo Bay has been decreasing,” said Max Abrahms, a terrorism expert from Northeastern University. “It has become less valuable as an anti-U.S. propaganda tool.”

Al Qaeda has for years used Guantanamo Bay, which was established in January 2002, as the sole reason for carrying out terrorist attacks on the West. In 2002, militants associated with al Qaeda said they had killed Wall Street Journal reporter Daniel Pearl for the mistreatment of detainees in the prison.

Pearl’s kidnappers demanded the release of Pakistani detainees at Guantanamo Bay in exchange for his life. Days later, a video of Pearl’s beheading was sent to the U.S. consulate in Karachi.

But the Guantanamo Bay propaganda tool is slowly fading, especially with the increase in releases of detainees. In 2013, President Obama called on Congress to close Guantanamo Bay. Over the past year, 28 prisoners have been released from the prison, the BBC reported.

The release of the CIA Torture Report in December, which detailed the gruesome tactics U.S. officials used on detainees in Guantanamo Bay, did not reignite al Qaeda’s old recruitment strategy.

“With the torture report, almost everyone focused on the grisly means that were used,” Abrahms said. “But I don’t think that motivates people to become terrorists anymore because [those facts] are well known.”

There are still 122 detainees at Guantanamo Bay, but analysts have said al Qaeda is no longer focusing its efforts there. Its main recruitment tool is now denouncing the Islamic State, also known as ISIS or ISIL. It is trying to present itself as the only viable option for young jihadists.

After staging the Sept. 11, 2001, attacks on the U.S., al Qaeda was arguably the strongest and most-feared Muslim terrorist organization in the world for more than a decade, recruiting militants en masse from madrasas, or Islamic schools. However, the group met its match in 2014 when ISIS seized large portions of Iraq and Syria and declared itself a caliphate. The Islamic State’s brutal video campaign has attracted tens of thousands of fighters from more than 80 countries as of this month — and it also has aroused the ire of al Qaeda, which is now marketing itself as the only viable option for jihadi hopefuls.

In recent months, al Qaeda in the Arabic Peninsula, or AQAP, a Yemen-based offshoot of the group, has released videos in which it denounces the brutal Islamic State strategy of beheading hostages and mass-executing opponents.

ISIS, on the other hand, has dominated in delivering the message that the West’s bombardment of Iraq and Syria is morally unjust. It uses propaganda videos to show coalition planes bombing their convoys in an attempt to draw sympathy from the younger generation of jihadists. That recruitment strategy has proved fruitful for the group, which has seen an uptick in foreign fighters traveling to Iraq and Syria over the past six months.

Clint Watts, a former U.S. counterterrorism official, wrote recently that both al Qaeda and ISIS are harnessing the emerging broad-based jihad that is turning into a social movement.

“Today’s jihadi threat, blended between al Qaeda and ISIS, networked by Facebook, and evolving based on conditions in hundreds of locations, produces attacks on three or more continents every day,” he wrote in a recently published report. “On the surface this seems to indicate a stronger, unprecedented emerging jihadi threat to the West. We analysts and followers of jihadi activity, though, often give terrorists too much credit. Many, if not most, Western jihadis are deeply troubled souls, at times more confused about their intentions and motivations.”

Watts goes on to write that counterterrorism experts still are trying to define this new era of jihad. With the closing of Guantanamo Bay and the emergence of ISIS, the terrorism landscape is vastly different from what it was following the 9/11 attacks.

“Monitoring the pace and type of attacks directed and networked by both al Qaeda and ISIS will illuminate how jihadis compete and cooperate in the coming years,” he wrote.