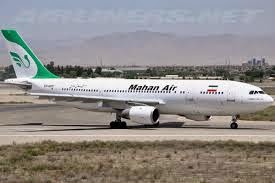 A first Iranian flight landed in the Yemeni capital on Sunday, a day after officials from the Shiite militia-controlled city signed an aviation agreement with Tehran.

The Mahan Air plane arrived in Sanaa carrying a team from the Iranian Red Crescent and medical aid, an aviation official told AFP.

Senior Iranian diplomats were on hand to welcome the flight — the first between the two countries in many years.

Yemen’s official Saba news agency, which is controlled by the Shiite militiamen who overran Sanaa in September, said that under the deal with Iran Mahan Air and Yemenia would operate 14 flights each a week.

Tehran has repeatedly been accused of backing the Huthi militia.

US Secretary of State John Kerry said on Tuesday that “critical” support of the militia by Shiite-dominated Iran “contributed” to the collapse of Yemen’s government.

President Abedrabbo Mansour Hadi stepped down under pressure in January and was placed under effective house arrest by the Huthis, from which he escaped last weekend to the main southern city of Aden.