You are here: Home / Senza categoria / London schoolgirls among 60 female Britons thought to have joined Isis 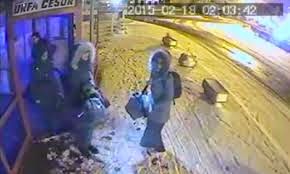 Sixty British women and girls, including 18 teenagers, are believed to have travelled to Syria to join Islamic State (Isis) militants, the UK’s top counter-terrorism police officer has said.

Deputy assistant commissioner Helen Ball, senior national coordinator for counter-terrorism, revealed that about five of them are 15 – 16.

The figures came as fresh CCTV images emerged of three London schoolgirls who secretly caught a flight to Istanbul after slipping out of their homes last month.

Shamima Begum, 15, was pictured with Amira Abase, also 15, and Kadiza Sultana, 16, on the Turkish leg of their trip before they were feared to have crossed the border into Syria.

The grainy footage shows them waiting at Bayrampaşa bus station, in a suburb of the city, after landing on a Turkish Airlines flight from Gatwick airport on 17 February.

The girls, all pupils at Bethnal Green academy in east London, are shown wearing hooded winter coats as they wait for a bus in snowy conditions.

On 24 February, a week after the girls left their homes, Scotland Yard said they were believed to have entered Syria. It is thought they were smuggled into the country, large swaths of which are controlled by Isis, near the Kilis border crossing.

Speaking on the BBC’s Andrew Marr Show on Sunday, Ball said police were getting increasingly concerned about the growing trend of young women planning to make the treacherous journey from Britain – many of whom are disguised to avoid suspicion.

“This is a growing problem and it’s one of real concern. The more everybody involved in travel can be alert and be vigilant and look out for people the better,” she said.

“There’s a new police power to remove someone’s passport if we are concerned they might be travelling for terrorist activity – we have used that already.

“But mostly this is about vigilance of everyone who is working in the industry … some of those women and girls are very carefully prepared for their travel so that they don’t stand out. They take unusual routes and it is very hard to spot them.”

Turkish Airlines and UK border agencies have been criticised for failing to stop the three girls from travelling on a now well-worn route to Isis in Syria.