You are here: Home / Europe / 56% of French favor sending troops to fight Islamic State in Syria 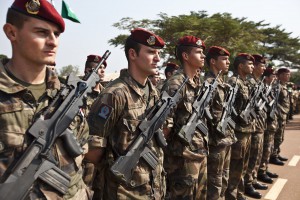 More than 55 percent of French people would like to see their government send troops into Syria to fight the Islamic State group, according to a poll published Sunday by the French newspaper Le Journal du Dimanche. The poll also showed that opinions were split about whether current military airstrikes could solve the conflict; with 48 percent saying that coalition military action was the only way to repel ISIS and 50 percent doubting military intervention could be useful.

The poll, which was conducted by Paris-based marketing firm the French Institute of Public Opinion was carried out by telephone on Friday and Saturday among just over 1,000 people.

A similar poll conducted in the U.K. in March showed that only one in three people was in favor of sending ground troops to fight ISIS in Syria and Iraq, but support for airstrikes had risen from 52 percent in September to 63 percent in March.

A U.S. poll taken in February showed that for the first time a majority of Americans favor the U.S. sending ground troops into Iraq and Syria to fight ISIS. Around 57 percent said they would like to see boots on the ground, which is up from an October poll that showed only 47 percent favored such a move, according to a CBS report.

France is currently only participating in airstrikes in Iraq, but is providing weapons to the so-called moderate opposition in Syria. Last Monday, French President Francois Hollande said that sending troops to fight in Syria was “unrealistic and illogical.”

U.S.-led coalition strikes against the Islamic State group began in June 2014 and have targeted ISIS strongholds in Syria and Iraq. No western countries have so far committed troops to a ground offensive.