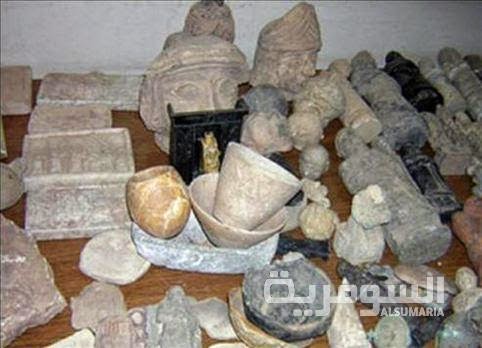 According to an Iraqi deputy minister, Daesh is allegedly using such sales to generate money for the militant group

Daesh is selling stolen artifacts from a museum in Iraq’s Mosul city to buyers in Europe, an Iraqi deputy minister said Wednesday.

Qais Hussein Rashid, deputy minister of culture, told The Anadolu Agency that his ministry had information that the valuable artifacts were now being sold in Europe.

According to Rashid, Daesh was allegedly using such sales to generate money for the militant group. He added that Iraqi authorities were taking measures to retrieve the stolen art treasures.

On Feb. 26, a video published on social media showed Daesh smashing ancient statues with sledgehammers at the Mosul museum.

Also, the Mosul library, home to some 8,000 historical texts, has also been burnt down. It had many hand-written books from the Ottoman, Abbasid and Ayyubid periods.

Daesh ‘bombs Saddam’s palace in Mosul’
Daesh has reportedly blown up a palatial home of former Iraqi President Saddam Hussein in Mosul in northern Iraq, according to an Iraqi Kurdish MP.

Saddam’s second-largest palace in Iraq on the Tigris river, which was larger than the White House in Washington, was completely destroyed by Daesh, Saed Memuzini, an Iraqi Member of Parliament from Kurdistan Democratic Party told The Anadolu Agency on Wednesday.

Saddam Hussein ruled Iraq from 1979 until 2003 and was executed in 2006 after being convicted of committing human rights violations in a controversial trial.

Tribesmen said Hussein’s remains were moved to a safe place in June, 2014, before his tomb was attacked by pro-Iraqi government Shiite militia al-Hashid al-Sha’bi in August 2014 and recently by Daesh.