You are here: Home / MidEastGulf / National Mobilisation Unit, the fighters preparing to retake Mosul from ISIL 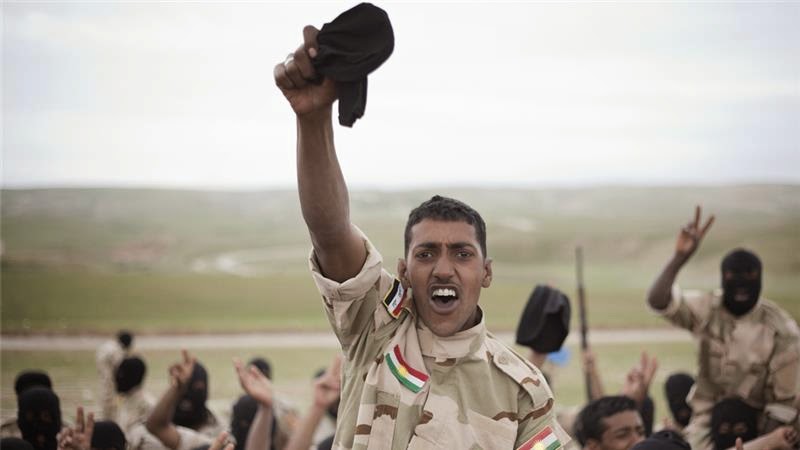 A 33-year-old man, once a sergeant in the Iraqi army, turns his head to hide the tears flowing down his face. His fellow soldiers are singing and chanting as they march across green fields just 21km away from Mosul, which is controlled by the Islamic State of Iraq and the Levant (ISIL).

“I am crying for Iraq and for my city,” the former sergeant said. “I feel bad that this pure land has become filthy with ISIL.”

The former sergeant, who asked to be named “Son of Mosul” to protect his identity, remembers how ISIL fighters killed his friend when they stormed the city last June.

Iraqi soldiers in the city, the second-biggest in Iraq, put up little resistance to the takeover. The former sergeant said he fled Mosul to Iraqi Kurdistan following ISIL’s takeover of the city. “I feel very sorry the army did not fight, so I decided to fight here again,” he explained.

The former sergeant is one of roughly 500 mainly Sunni Arab fighters training to retake Mosul, as part of what is being called the National Mobilisation Unit formed by Mosul’s exiled governor Atheel al-Nujaifi.
But it remains unclear which forces will take part in the proposed attack, and whether these men will be prepared to retake the city. Another 1,000 men have already been trained in the same camp by former Iraqi army officers, according to Nujaifi.

Analysts say that if the National Mobilisation Unit is successful, it could allow Mosul’s anti-ISIL Sunni officials, now in exile, to rebuild influence after the blow of losing Mosul.

An official from the office of Iraqi Vice President Usama al-Nujaifi , who asked not to be identified for security reasons, explained that Iraq’s central government intends for both the National Mobilisation Unit and the Popular Mobilisation – a group of predominantly Shia forces that is currently fighting -alongside Iraqi army- to retake the city of Tikrit from ISIL – to eventually be merged into a new Iraqi National Guard.

According to camp officials and governor Nujaifi, around 4,000 volunteers have registered to join the National Mobilisation Unit, who range in age from 18 to 63 and who include not just Sunni Arabs but also Kurds, Christians, Yazidi and Shia fighters.

But due to the limited space, they are training in groups of 500 persons each.

The lapels on some of their uniforms portray the Iraqi flag alongside the flag of the Kurdistan region – “to unify us”, said the deputy commander of the training camp, a former general in Iraq’s Saddam Hussein-era army who fought the Americans in 2003, but didnot want to give his name for security reasons.

The deputy commander added that he enjoys “good” coordination with Kurdish fighters known as peshmerga stationed on the front lines, three kilometres away.

“[The men] are new here, so we can’t give them real bullets to fire,” the deputy commander explained. “At the end of the course, we will take them to shoot.”

For now, they are being taught how to use weapons in lying, standing and kneeling positions. “I am sure they will fight: [Unlike] soldiers from other places, they are from Mosul,” said the deputy commander.
The plan is for the National Mobilisation Unit to support the Iraqi army during the offensive on Mosul, and for it to then remain there. “It is better to have connections with the people who are the same citizens – not from other places,” said Nujaifi, adding that problems could arise if Shia militias stay in Mosul, were the city to be taken back from ISIL.

The central government hasn’t armed the National Mobilisation Unit, but Nujaifi said that Baghdad is providing them salaries [IQD 850,000, about $717], while the Kurdish regional government [KRG] in northern Iraq has given land for training, and that the Turkish government has sent trainers.

Nujaifi added that he bought the weapons the men are now using on the black market in Iraqi Kurdistan.
The US military’s Central Command announced earlier this year that the battle to retake Mosul could begin this spring, but Iraqi government officials said that they would decide on the timing.

Kurdish peshmerga at the Bashiqa frontline,18km from Mosul, are putting the most pressure on Mosul, but haven’t committed to joining an assault on the city, which could cause a backlash from the city’s mainly Sunni Arab residents.

A senior military official in the international anti-ISIL coalition said recently in a press conference that Iraqi security forces are “absolutely” ready for a Mosul offensive, but stressed that the decision on when to strike would come from the central government.

“There has to be pressure on ISIL in Mosul as soon as possible,” said Ahmed Ali, a senior fellow and director of Iraq security and humanitarian monitor at EPIC, a US-based non-governmental organisation. “ISIL is feeling the pressure and they are a paranoid organisation, so they’re taking steps to consolidate their defences and positions in Mosul,” said Ali.

But ISIL’s failure to provide basic services, it’s extremely strict form of governance and its destruction of the area’s cultural heritage have made the group unpopular, according to those who have fled the city.

The deputy commander of the camp, a former resident himself said: “Most people in Mosul do not support ISIL and will join us, especially when they see them [ISIL] destroying our cultural history.”

Without proper planning, attempts to retake Mosul could alienate its populace from the Iraqi armed forces, experts warn. “There has to be coordination between the federal government, KRG and these forces,” said Ali, adding that the fall of Mosul was a huge blow to Iraqi national pride that could be rebuilt if the operation succeeds.

Attempts by outside forces to take the city could also lead to retribution against civilians accused of supporting ISIL. This month, Human Rights Watch released a report pointing to abuses committed by Shia militias as they retook land from ISIL in Amerli in Salahaddin province last September.

And earlier this year, reports surfaced of Yazidi militiamen killing Arab villagers in revenge for massacres and rapes of Yazidis carried out by ISIL fighters in Sinjar.

“Because of how things work in Iraq and the damage that ISIL actions have caused in trust between different communities, with any force that clears areas from ISIL we will see retribution,” said Ali.

On Iraq’s northern front, Kurdish fighters are attempting to push back ISIL and cut off their supply lines. On the road by the camp, an ambulance returns after dropping off the body of a Kurdish fighter killed by an ISIL sniper to a morgue in the nearby city of Dohuk.

Meanwhile, the trainees shout “We are the lions of Nineveh!” as they tramp across the verdant fields, wearing black balaclavas to protect their identities and holding unloaded Kalashnikov rifles above their heads. “Daesh [ISIL], do not dream of Mosul,” they chant. “Say goodbye to my mother – I am going to fight for my city.”