You are here: Home / Senza categoria / US drops propaganda leaflets on Islamic State 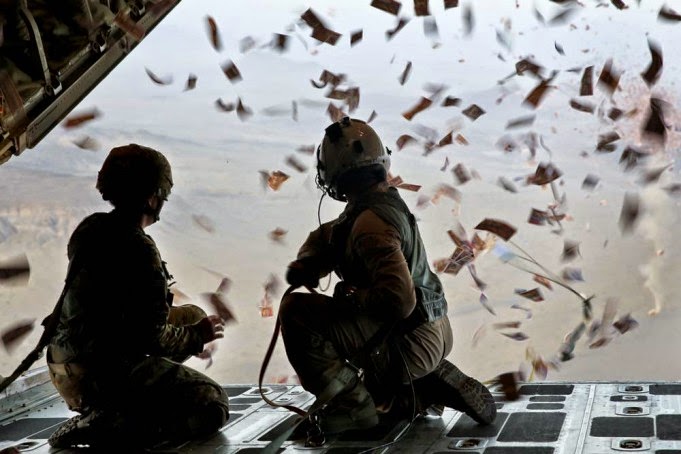 The US military has dropped 60,000 leaflets on the Islamic State group’s de-facto capital in Syria showing a grisly depiction of extremist recruits being fed into a meat grinder, the Pentagon says.
An F-15E fighter jet last week unloaded a canister containing the graphic leaflets on the northern city of Raqa, the latest in an effort by a US-led coalition to undermine the IS extremists’ own extensive propaganda and recruiting efforts.
“The message of this leaflet is: if you find yourself recruited by Daesh, you will find yourself in a meat grinder – and it’s not beneficial to your health,” said Pentagon spokesman Colonel Steven Warren, using the Arabic acronym for the IS group.
The drawing shows young men lined up under a sign in Arabic, “Daesh Recruiting Office”.
An IS man with a monstrous face is beckoning a frightened-looking recruit forward, while a second IS member is operating the meat grinder, pushing someone into the machine – which is labelled “Daesh”.
Blood is spewing from the grinder’s feeder tube, and two legs are sticking out.
US diplomats and generals have said IS has proved adept at exploiting social media and reaching potential volunteers online with slickly produced videos.
The leaflets were produced by members of Military Information Support Operations, known previously as psychological operations, Warren said.