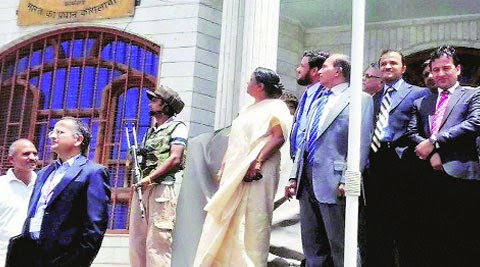 Having failed to execute any major terror strike in the Kashmir Valley over the last few months and increase militant activity in the region, Pakistan’s Inter Services Intelligence (ISI) is now hatching a major conspiracy to target Indian assets in Afghanistan, including the embassy and consulates.

Top intelligence sources said security at these installations has been beefed up considerably in wake of these fresh inputs and even the staff working there has been advised to remain on high alert.

According to a report prepared by an external intelligence agency, the ISI has roped in both the Lashkar-e-Tayyaba and Taliban operatives for this purpose. Lashkar is also suspected to have carried out the attack on the Indian consulate in Herat in May last year with help of Pak security agencies.

“Despite repeated attempts, Pakistan has failed to increase militant activities in the Valley except the recent attacks in Kathua. This is largely due to increased patrolling by Indian forces along the border and the pressure they have mounted on the militants operating in the Valley. Thus the ISI now wants to change its modus operandi and shift focus to neighbouring Afghanistan to target Indian assets there with help of Taliban also,’’the report states.

India is actively involved in a lot of infrastructure and construction projects in Afghanistan helping the country re-build after a long internal war. Even America wants India to play a greater role in Afghanistan particularly in the over all security scenario once the United States starts pulling out its troops by end of this year.

Thus, it becomes even more important to provide foolproof security cover to Indian assets in Afghanistan. According to this classified intelligence report, Pakistan is extremely skeptical of India’s growing presence in Afghanistan and specially the support that its receiving from America.

“Pakistani security agencies will go to any extent to ensure that India does not stabilise its operations in Afghanistan and will try and reduce its influence. So they will encourage terror outfits to target our assets there,’’ a senior intelligence official said.