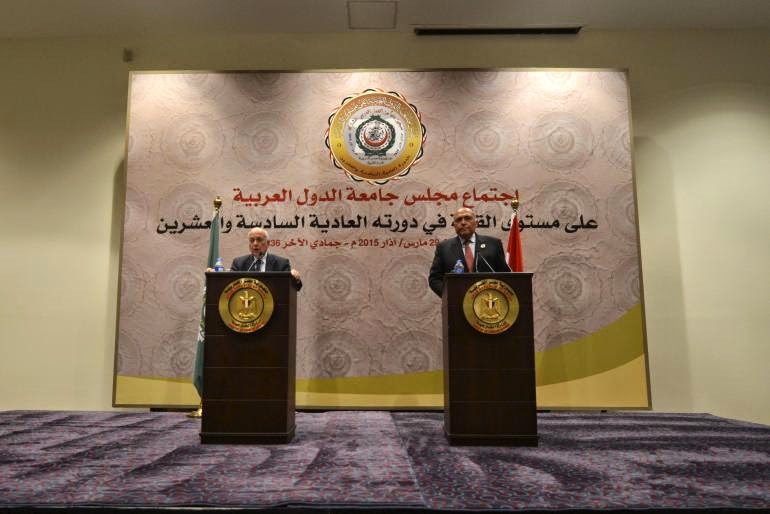 Foreign ministers from 22 Arab countries agreed to form a unified military force on Thursday, approving a draft resolution designed to counter growing security threats in the region.
“The Arab … ministers agreed on adopting an important principle, which is forming the unified Arab military force. The task of the force will be rapid military intervention to deal with security threats to Arab nations,” Arab League Secretary General Nabil Elaraby told reporters after the meeting, Reuters reported.
The agreement, which Elaraby described as “historic,” came shortly after airstrikes on Houthi rebels in Yemen, led by Saudi Arabia and its Arab allies, in an effort to check what is seen as Iran’s growing influence in the region.
Iran has demanded that all military actions in Yemen be immediately halted, and said it would take necessary measures to control the crisis there.
The United States has said it provided “logistical and intelligence support” to the Saudi-led coalition attacking the Houthi positions. The decision to launch the airstrikes was made without significant involvement from Washington, according to the Daily Beast.
Egyptian TV reportedly said that the Arab League will coordinate with the chiefs of staff of the various Arab nations’ armies to organize the new force within one month. Egyptian officials also announced that a ground invasion of Yemen will follow the airstrikes.
A naval blockade has been imposed by the Saudi ship Firmness Storm on a strait that connects the Red Sea to the Arabian Sea and the Indian Ocean, and provides passage to the Mediterranean Sea.
The strait is used by Egypt, Sudan, Jordan, Yemen, Djibouti and Saudi Arabia, among other nations. Four Egyptian vessels were spotted en route to secure the Gulf of Aden, off the city where President Abed Rabbo Mansour Hadi was based out of after leaving the capital city of Sanaa, and before being forced to flee the country.
Al Arabiya reported that at least 150,000 Saudi ground troops have been mobilized along with fighter jets and naval units, as part of the move codenamed, “Operation Decisive Storm.”
The Organization of Islamic Cooperation, another regional body of Islamic states, affirmed its support for the deal and said it is monitoring the situation in Yemen closely. The Syrian National Coalition, an alliance of Syrian fighters allied with the West, also said it supported the operation and reasserted its recognition of Hadi as Yemen’s “legitimate” leader.
The Arab world is currently facing unprecedented threats on multiple fronts. In Yemen, Houthi militants believed to have Iranian backing have taken over large swathes of the country including its official capital. In Libya, a civil war is raging between a government that controls the capital of Tripoli, and the internationally recognized government — aided by Arab and Egyptian airstrikes — based out of the city of Tobruk.
In Syria, a civil war has raged on for four years between President Bashar Assad’s government, which is backed by Iran, and loose coalitions of militants, as well as the Islamic State group. ISIS has taken over significant portions of Iraq and Syria, has expanded into Libya, and has been drawing membership from across the Islamic world, recently gaining the loyalty of Nigerian extremist group Boko Haram and claiming responsibility for a deadly terror attack in Tunisia.