You are here: Home / Senza categoria / Yemen crisis: who are the Houthi rebels? 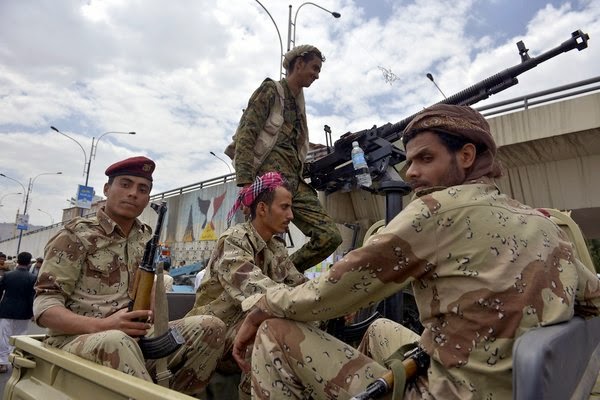 A once obscure Shia Muslim rebel movement has seized effective control in Yemen, a strategic shift that has dire implications for the Middle East and Western foreign policy

While the West was transfixed by jihadi beheadings of hostages in Syria last autumn, another history-shaking episode in the breakdown of the Arab world was playing out 1,500 miles away.

Western leaders hardly seemed to notice. But a once obscure Shia Muslim rebel movement known as the Houthis swept from the north into Yemen’s picture-postcard capital Sana’a, barging aside the US- and UK-backed army, and seized effective control.
Any thought that this was a random event in a country whose politics and feuds have always had the capacity to baffle its own people, let alone outsiders, was set aside with a single statement.
An Iranian politician close to that country’s Supreme Leader, Ayatollah Ali Khamenei, could not contain himself. Ali Reza Zakani, an MP, boasted that Sana’a was now the fourth Arab capital in Iranian hands – after Beirut (through Hizbollah), Damascus (through President Assad) and Baghdad (through Iraq’s democratically elected Shia-led government).
The extent to which Iran physically armed the Houthis is disputed, though a ship carrying weapons apparently from Iran was seized in Yemeni waters two years ago.However, the Houthis have close ties to Hizbollah, and the fact remains that Shia militias or armies now control parts of both Saudi Arabia’s southern border, with Yemen, and northern border, with Iraq.

That is a stunning blow for Saudi Arabia, a hardline Sunni absolute monarchy which regards Iran, a Shia theocracy, as its mortal enemy for historic and political as well as religious reasons.

It is also, on the surface, a stunning blow for the West. The US and UK – and regional allies like Saudi Arabia – strongly backed a political settlement in Yemen following an “Arab Spring” uprising against the country’s long-time leader, President Ali Abdullah Saleh, in late 2011.

That put a pro-western replacement, Abd Rabbuh Mansur Hadi, in office, presiding over a parliament that was supposed to represent all shades of Yemeni political thinking apart from al-Qaeda, which is strong in some southern and eastern parts of the country.

Since taking over the capital last September, the Houthis have allowed Mr Hadi to remain technically in office, but his is a hollow authority, with the Houthi militias controlling the streets of Sana’a and large parts of non-Houthi controlled Yemen already in a state of near-lawlessness.

The collapse of Mr Hadi’s control was another apparent disaster for President Barack Obama’s Middle East policy: just as in Iraq, a political settlement for which he had long striven fell apart with a rampant al-Qaeda now facing off directly against a Shia Iranian proxy.

There is some consolation in that this disaster for western policy has clarified some of the previously deeply complex and ambiguous positions of what had become, after years of jockeying for position, a many-sided civil conflict in Yemen.

It also made clear that no one grouping within that conflict has the strength to win an absolute victory: the Houthis, who represent a Shia minority that is just a quarter of Yemen’s population, will never rule the whole country, but seems strong enough to hold at bay al-Qaeda’s militant Sunni Islam, which has become increasingly attractive to its impoverished provinces.

On the other hand, it has also forced major actors into deeply dangerous positions. While the Houthis have allowed Mr Hadi some freedom to operate, it has turned on the democratic political opposition, the Sunni Islamist Al-Islah party.

Al-Islah is the Yemeni version of the Muslim Brotherhood, who were kicked out of office in a Saudi-backed military coup in Egypt in 2013.

The only likely outcome of current events is an enforced deal between the government and the Houthis. That will see their mutual enemy, Al-Islah crushed – but will almost certainly be backed by Iran, Saudi Arabia and the West, as the only way to counter al-Qaeda.

This in turn means that once again old enemies will effectively become allies against Sunni political Islam – in not only its jihadi form, but also its democratic manifestation.

That was not supposed to be what the Arab Spring was about.

Who are the competing factions?
The government: still the government, in theory, through the ceasefire negotiated with the Houthis after they took Sana’a. Pro-western and with some electoral legitimacy after Mr Hadi won an election in 2012. Admittedly, he was unopposed – but he had the support of both the parliamentary majority and opposition.

Houthis: the Houthis’ adherents are Zaydi Muslims, followers of the Shia religious school historically seen as closest to Sunnis, which made it easier for a Zaydi caliph to rule much of present-day Yemen for many centuries until the 1962 revolution. However, the sect has come to be dominated by a clan that owes allegiance to a now dead rebel leader, Hussein Badreddin al-Houthi, who declared war on the government in 2004. The Houthis’ Shiism has led them to a pro-Iran, anti-Western position – its adherents carry flags saying, “Death to America, Death to Israel”.

al-Qaeda in the Arabian Peninsula: the settlement that brought Mr Hadi to power was also supposed to provide Yemen with a common front to take on al-Qaeda’s jihadist insurgency, backed by American air-power. Unfortunately, military success on the ground was countered by more attacks by AQAP on sectarian rivals like the Houthis, giving the latter a further pretext to oppose the government.

Al-Islah: a Sunni Islamist political movement which is Yemen’s version of the Muslim Brotherhood, it is the main constitutional opposition to the government. Its leaders have been targeted for reprisals by the Houthis, as the two represent the rival sects of political Islam.

Al-Hirak: just to complicate matters further, southern Yemen – centred on the part of the country once run by the British Empire and then by the Soviets – has a strong secessionist movement. Socially more liberal, even non-secessionist southern sheikhs occasionally surprise visitors by lapsing into fond memories of both British and Soviet colonialism.

Former President Ali Abdullah al-Saleh and General Ali Mohsen al-Ahmar: the eminences grises of Yemeni politics, these two distant cousins ran the country for decades, Mr Saleh as president and Gen Mohsen as effective security chief. The two men fell out in 2011 as Mr Saleh refused to quit in the face of an “Arab Spring” uprising. In a strange twist, Mr Saleh, who fought the Houthis for years, is now said to be in such a sulk at having been forced from office that he is backing them with those parts of the army apparatus controlled by his many relatives, partly out of revenge against Gen Mohsen, who has retained power over a rival army faction.