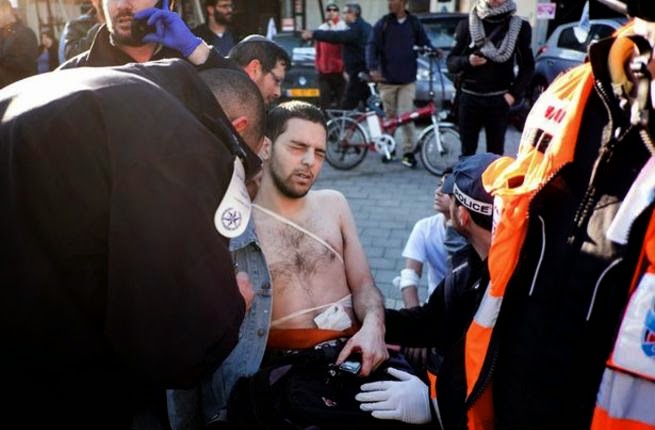 Deputy head of Hamas Moussa Abu Marzouq said that “there is no bigger terrorism than occupying people, stealing their lands, freedom and dignity.”

Bahr said in a statement that the “negotiations path” followed by the Palestinian Authority was a waste of time and a chance for Israel to “Judaize” what is left of Jerusalem and expand its settlements.

He called on the Palestinian leadership in Ramallah to abandon negotiations and return to resistance.

The Popular Resistance Committees also applauded the stabbing attack, which it described as a “natural reaction to all Israeli crimes against Palestinians, their lands and religious sites.”

The PRC added in a statement that “resistance attacks will not stop.”

The statement called for a complete intifada inside Israel and to support Palestinians in the Negev.

Israeli police say a Palestinian wounded at least five passengers in the stabbing rampage on a Tel Aviv bus shot by a passing prison officer.

The attacker struck in the morning rush hour in the heart of Israel’s largest city.

Five people were moderately to seriously wounded, while four were lightly injured, police said, citing emergency services at the scene. Israel’s Ynet news site put the number of injured at 17.

It was not immediately clear if all the casualties had been stabbed or if they included some suffering from shock.

Locals from the camp told Ma’an that Hamza was not affiliated to any political faction. They said that Israeli forces summoned his father and other family members for questioning at offices of the Israeli military liaison department.

“Last night Hamza and I hung out with friends in the camp until 11 p.m. and we had fun,” a friend of Hamza’s told Ma’an. He added that he didn’t notice anything unusual with Hamza.

“He was laughing and kidding and I know very well that he isn’t affiliated to any faction.”