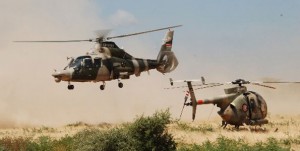 Another airstrike by the Kenya Defence Forces jets on an al Shabaab camp in Jungal, 40km from Bardhere in Somalia, has killed 51 militants, including several middle-level commanders.

The slain militants are reported to have been behind the recent slaughter of 14 stonemasons in Mandera county.  “Today at 3am, Amisom forces launched major artillery bombardments against al Shabaab militants in Jungal, 15km Northwest of Tarako and 40km West of Bardhere in Gedo region.

An unspecified number of injured militants escaped into Bardhere. The strike at Jungal is therefore a setback to the militants,” Obonyo said.

Jungal is one of the main al Shabaab planning bases in Gedo region, which has seen increased activity in the past few months.  KDF jets on Wednesday morning struck Somalia’s Lagolei area in Elade, Gedo, and killed seven al Shabaab fighters during a gunfight. A Kenyan soldier was killed and another injured during the raid.

Al Shabaab terrorists planted an improvised explosive device, which was run over by a KDF vehicle before a firefight ensued.   “The troops were on routine duties in the environs of Elade when their vehicle was hit by an IED laid by al Shabaab terrorists.

The soldiers pursued the terrorists and in the ensuing firefight, seven al Shabaab terrorists were killed, eight AK47 rifles, two grenades and assorted ammunition  seized. KDF lost a soldier while another was injured and is receiving treatment,” Obonyo said.  He said there has been increased al Shabaab activity following sustained pressure by Amisom troops in Somalia, particularly the deployment of Ethiopian troops in Bay Bakool.

This, he said, has forced al Shabaab to escape West into Gedo and South towards Lower Shabelle. He condemned the recent barbaric attack by Al Shabbab in Baragoni during which the terrorists burnt to death women and children including a pregnant mother who were being rushed to hospital by police. He said KDF will continue pursuing the terrorists until they are pacified.