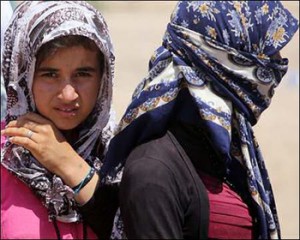 About 500 Yazidi women have been rescued from ISIS out of an estimated 4,000 in captivity, according to the the Head of the Women’s Rights Defense Committee in the Kurdistan parliament.

Speaking on Sunday, Evar Ibrahim said 157 women of the 500 rescued are in bad psychological and physical condition and are receiving treatment in Duhok.

Hundreds more were captured, enslaved, or killed by militants.

“When ISIS entered Sinjar, they committed many crimes like beheading men and making women hostages in Kojo village,” Ibrahim said.

She added, “We as the committee asked the Iraqi Defense Ministry, Peshmerga Ministry and Interior Ministry of the Kurdistan Region to try to rescue the Yazidi women soon.”

Some of the women captives are believed to have been sold in Tal Afar, Iraq and in the ISIS-stronghold of Raqqa in Syria.

According to Ibrahim, “the cheapest price of the sold women was $10 and the most expensive was $100.”

Hundreds and possibly thousands of Kurdish Yazidi women and girls have been forced to marry or been sold into sexual slavery by the ISIS according to Amnesty International.