You are here: Home / Europe / 50 % of European terrorists in Islamic State group in Iraq and Syria are French 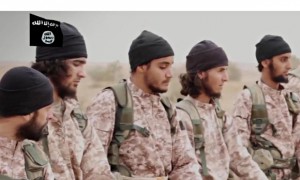 Approximately fifty percent of the European Takfiri terrorists who have joined the ISIL Takfiri group in Iraq and Syria are French, a report by Abna24 says.

According to the report revealed by Senator Jean-Pierre Sueur, a member of Frances’s upper house of the parliament, Senate, on Wednesday, in excess of 1,430 French individuals, 47 percent of European militants, have traveled to the Middle Eastern countries of Iraq and Syria to join the terrorist group.

Sueur also disclosed that the French intelligence services are monitoring over 3,000 French individuals suspected of having connections with terrorist groups in Syria.

The report also says that as many as 85 French nationals have been killed in the ongoing conflicts in the areas under the control of the ISIL Takfiri group, and at least two French nationals are being held in Syria.

The French officials further noted that 200 French nationals have left the battle zones for France, prompting fear that they can commit acts of terrorism in the country.

Sueur further said that a total number of 152 extremist are currently held in jails in the country.

Some 1,400 people living in France have either joined militancy in Syria and Iraq or are planning to do so, French Prime Minister Manuel Valls said in January.

According to a report by the United Nations, over 25,000 militants from more 100 nations have joined al-Qaeda and ISIL Takfiri militants in Iraq and Syria and other countries.

The analysis, which was carried out by a panel of experts monitoring UN sanctions against al-Qaeda, shows that the number of foreign terrorists spiked by 71 percent between mid-2014 and March 2015, the Associated Press reported on April 1.

Syria and Iraq were the destination for over 20,000 of the militants, where they went to join ISIL and the al-Nusra front, the report added.

The Takfiri extremists currently control parts of Syria and Iraq. They have carried out atrocious crimes in the two countries, including mass executions and the beheading of people.