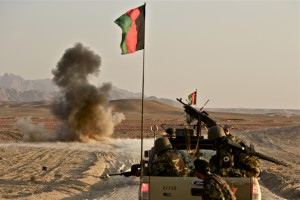 Some 50 Taliban militants have been killed as Afghan army had waged operations across the country since early Monday, the country’s Defense Ministry said on Tuesday morning.

“The Afghan army carried out operations over the past 24 hours, killing 50 terrorists and wounding 38 others in different provinces,” the ministry said in a statement providing daily operational updates.

The army’s specialists had found and defused 32 roadside bombs and landmines while the army operations had also led to seizure of weapons and ammunition, the statement said, adding that six army personnel were also killed as a result of enemy’s firing and roadside bomb explosions within the same period, according to the statement.

The Taliban responds by bombing and armed attacks.

On Monday, five civilians were killed and 16 others wounded in a suicide bomb attack near Kabul International airport.