You are here: Home / Africa / 50 Kenyan soldiers killed in al Shabaab attack on African Union base in Somalia 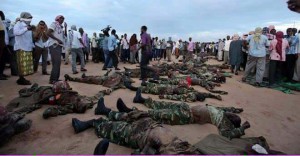 Al Shabaab, a group aligned to al Qaida, launched the attack on the African Union base run by Kenyan peacekeepers in Ceel Cado, about 550 km west of Mogadishu, near the Kenyan border.