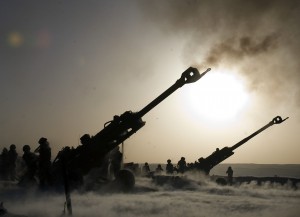 According to Sky News Arabia, the incident — which has not yet been confirmed by official Egyptian sources — took place south of the town of Sheikh Zuweid, in the northern Sinai.

The Islamic State’s presence in the peninsula, a group known as Sinai Province, pledged allegiance to the Islamic State and its leader Abu Bakr al-Baghdadi in 2014. The group draws much of its support from Bedouins in the Sinai, who have long felt neglected by the Egyptian government.

The Egyptian military has carried out multiple operations against the group in Sinai. In October, the army launched airstrikes against jihadist targets in the Sinai after Islamic State killed 12 soldiers at a checkpoint.

Israel’s Haaretz newspaper quoted Egyptian defense sources as saying that around 100 jihadists were killed in around three hours of strikes.