You are here: Home / MidEastGulf / 50 ISIS fighters killed as Peshmerga repulse attack on villages near Kirkuk 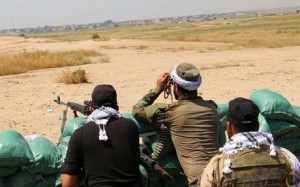 At least two Peshmarga fighters and some 50 Islamic State (ISIS) militants were killed in fierce clashes Tuesday morning in the ethnically-mixed village of Sahl al-Malih, some 30 kilometers south of Kirkuk city.

“As far as I know we have lost two Peshmerga,” Koyi said. “But at least four dozen Daesh (ISIS) bodies are in our hands now,” he said, adding the situation was now under control.

Another Kurdish military source on the ground, who wished to remain anonymous, told Rudaw that at least 40 militants supported by “some local collaborators” had entered the village at 5 am Tuesday and started to shoot at Peshmerga positions.

Sahl al-Malih has a mixed Kurdish-Arab population. Local Kurdish officials have in the past accused some of the Sunni tribes in the area of collaborating with ISIS.

“The Daesh gunmen were surrounded and after three hours of intense shooting they were all eliminated,” the military source said. “The Peshmerga are now in a house-to-house search for the remaining elements in the village.”

He added that the militants had attacked Peshmerga positions from both inside and outside the village in a surprise assault.

ISIS appears to have intensified attacks on Peshmerga positions in areas close to the key oil city of Kirkuk as an anticipated battle for the ISIS stronghold of Mosul nears.

On Monday, Peshmerga forces repulsed an ISIS attack in Kirkuk’s southern villages, resulting in the deaths of at least one Kurdish soldier and 15 militants.

Meanwhile, the Ukrainian interior ministry announced Monday that police are searching for ISIS “caliph” Abu Bakr Baghdadi in Ukraine, following reports he is believed to have entered the country.

“The police are interested in a male suspect in his 40s who is the leader of the Islamic State and is wanted by Interpol,” the ministry said in a statement.