You are here: Home / MidEastGulf / 5-year-old becomes terrorist: “It is forbidden to cry”

Children age 5 and 6 are learning how to become terrorists and suicide bombers, CNN has exposed today. One of the children who succeeded to run away stated that “the scariest moments were when they bombed from the air.” 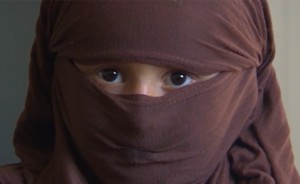 When the parents of 5-year-old Sarah aren’t looking, she is covered in a burka. That is what they taught her to do in the ISIS children’s camp, when the murderous terror organization held her and her mother before they succeeded to escape. The camp is around Raqqa in Eastern Syria, where the murderous terror organization focuses upon children, brainwashing them and teaching them to become terrorists.

In one recent propaganda film, one can see children dressed in uniforms standing in rows shouting “jihad” and they see themselves as the children of the ISIS army. In the video, a member of the terror organization, told the children: “Allah willing, soon we will be standing on the front lines against the unbelievers.”

Standing at the forefront of this are the Peshmerga Forces, members of the underground Kurdish forces in Erbil spoke about children swimming in the rivers, crossing borders, and fighting in the battlefields alone against the Kurdish forces far away from ISIS: “When they come to us, they are very thin. They go through hell there.”

In other cases, children had their weapons pointed at the Kurds. Kurdish fighter Aziz Abdullah Khader stated: “Many times, we come across child soldiers for ISIS. They are dressed in explosive belts.”

“They are brainwashed,” he told CNN. “They penetrate the ranks, operate explosive belts and kill people. This is an unacceptable decision. We don’t always know what to do. If you don’t kill them, they will kill you.” US security officials confirmed the grim testimony.

One of the children that succeeded to escape is a 12-year-old named Nasser. According to him, he ran away from the camp with around 60 child soldiers: “The scariest moments are when they explode from the air and this leads us underground.” Nasser related that there are even 5-year-old children in the camp and everyone partakes in the training: “We must not cry but when I think about my mother, I cry silently.”