You are here: Home / MidEastGulf / 5 Turkish soldiers wounded in second ISIL attack at Iraq base 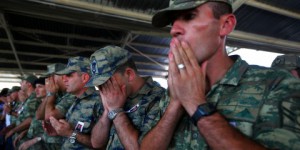 Five Turkish soldiers were wounded on Sunday in an attack perpetrated by the Islamic State in Iraq and the Levant (ISIL) on the Bashiqa training camp in northern Iraq, the second attack in two weeks on the camp.

ISIL militants first attacked the training camp on Dec.16, killing three Iraqi Sunni fighters and wounding 10 people, including four Turkish soldiers. A Turkish military statement said the four wounded soldiers were evacuated to a hospital in Turkey near the border with Iraq and none had life-threatening injuries.

According to security sources, five Turkish soldiers were slightly injured on Sunday when ISIL militants fired mortar shells on the camp. The soldiers underwent outpatient treatment, the sources said.

Turkey sent a contingent of an additional 150 forces earlier in December to bolster its military presence in the Bashiqa camp, which is near Mosul. The purpose of the reinforcement was to train local forces in the fight against ISIL. Although Ankara said it deployed forces in coordination with the central government in Baghdad, the Iraqi authorities claimed they had never invited such a force and the increased presence happened without its approval and knowledge. To defuse tensions, Ankara partially withdrew its forces from the camp and re-stationed them further north in the Kurdish region of the country.