You are here: Home / Mediterranean / 5 soldiers shot dead in Egypt’s Sinai by Islamists 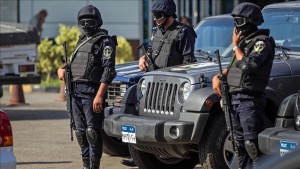 Five soldiers were killed in a militant attack in Egypt’s restive Sinai Peninsula late Sunday, according to a local security source and according to aa.com.tr.

Gunmen stopped a bus boarded by soldiers in central Sinai and shot them dead before fleeing the scene, the source said anonymously because he was unauthorized to speak to media.

“The soldiers were on their way to their military units after their monthly vacation,” the source said.

The Egyptian military mourned the soldiers in a statement, but gave no details about the attack.

Since mid-2013, when Mohamed Morsi — Egypt’s first freely-elected president — was ousted in a military coup, hundreds of Egyptian security personnel deployed in Sinai have been killed amid an ongoing militant insurgency.

The Egyptian security forces, meanwhile, continue to wage a fierce campaign — involving elements from both the police and the army — against what they describe as Sinai-based “terrorist groups”.

Egypt’s army-backed authorities say they are battling the Welayat Sinai (Province of Sinai) group, which is said to have links to the Daesh terrorist organization.