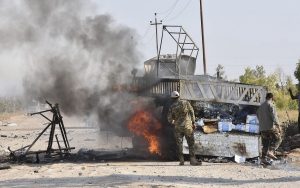 An unknown war plane targeted areas in Albukamal desert in eastern Syria, according to the Syrian Observatory for Human Rights.

The Observatory pointed out that the raid on the desert of Albukamal city resulted in “killing 5 members of these groups and damaged three cars.”

The observatory did not say who was behind the raid, but its director Rami Abdel Rahman said it was likely that Israel was responsible for the attack.

In recent years, Israel has intensified its bombardment in Syria, targeting mainly Syrian army positions and Iranian and other targets of the Lebanese Hezbollah.

Israel reiterates that it will continue to stand up to what it describes as Iran’s attempts to establish a military presence in Syria and to send advanced weapons to Hezbollah.