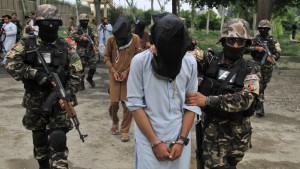 The Afghan Intelligence – National Directorate of Security (NDS) arrested at least 5 members of the Islamic State of Iraq and Syria (ISIS) terrorist group in Afghanistan.

A statement by NDS said the detained individuals hail from Pakistan and were involved in terrorist related activities in favor of ISIS terrorist group in Nangahrar province.

The statement further added that the detained individuals have been identified as Abdul Rashid also known as Ghulamullah who is originally a resident of Shengali area of Peshawar in Pakistan.

The other suspects were identified as Mohammad Ayaz son of Salim who is a resident of Orokzai in Khyber Pakhtunkhwa area of Pakistan.

The fifth suspect was identified as Miras Khan who is a resident of Peshawar city of Pakistan, NDS said.

The statement by NDS also added that the detained individuals were previously acting on behest of Mawlawi Salim and Mullah Gul Zaman who are ISIS commanders and are active in Achin district fo Jalalabad city.