You are here: Home / MidEastGulf / 5 Malaysian terrorists in Basilan suspected to be ISIS members 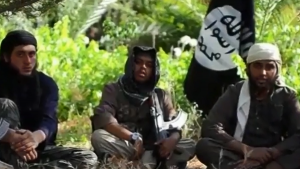 At least five Malaysian terrorists who are reportedly in Basilan are suspected to be members of the extremist jihadists Islamic State of Iraq and Syria (ISIS).
A report by Jun Veneracion aired on GMA News TV’s News to Go, security analyst Professor Rommel Banlaoi said he has received information from his Malaysian intelligence contacts that the five terrorists are hiding in Mindanao after fighting in Syria and Iraq.
“[They were] trained by ISIS and fought in Syria and Iraq, and they are already hiding in Mindanao,” he said. “The presence of the five Malaysians in the Philippines indicate that ISIS presence in the country is not imagined.”
He added that the five arrived in the country in 2014.
The television report said the Armed Forces of the Philippines has confirmed the presence of the five Malaysian terrorists in Basilan.
However, it denied that the five are confirmed ISIS members.
The AFP said four of the terrorists are identified as Ustadz Ahmad, Hadji Jama, Ustadz Kadir, and Ustadz Kamal. They have yet to identify the fifth one.
An unnamed military intelligence officer said the five are called “local ISIS” by other terrorists in the area although there has been no confirmation that they are members of the international ISIS.
Meanwhile, the same report quoted AFP public affairs chief Lt. Col. Harold Cabunoc as saying that they would be making an announcement once they confirm the presence of ISIS in the country.
“Natatanggap natin na may reports nga na diumano’y may ISIS na members dito, hindi natin maisantabi ang mga speculation na ‘yon dahil sa presensya ng armed conflict dahil ginagamit ito ng ISIS,” he said. “Ang armed conflict, uulitin ko, wala siyang proof as of now.”
In October 2014, a student in Zamboanga City said members of ISIS were recruiting students from a university there.
The student from Western Mindanao State University said ISIS has been recruiting students for two months, adding that each recruit would be given P70,000.
In August of the same year, the Bangsamoro Islamic Freedom Fighters and the Abu Sayyaf Group claimed to have pledged allegiance to ISIS.
A spokesman for the BIFF said, however, that is is not sending fighters to Syria nor is it recruiting members for the ISIS, which is also called the Islamic State.
Just last April, AFP chief Gen. Pio Catapang Jr. maintained that there are no ISIS militants operating in the country.