You are here: Home / Europe / 5 Macedonian police killed in clash with armed group 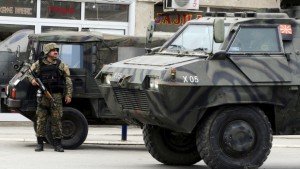 An armed group attacked special forces police Saturday in a town in northern Macedonia in a clash that killed five police officers and injured more than 30, officials said, amid a political crisis that has raised concern about the stability of the Balkan nation.

Interior minister Gordana Jankulovska told reporters late Saturday that the police casualties occurred during a sweep operation in Diva Naselba, a neighbourhood in western Kumanovo. Police had come under attack from automatic guns and bombs.

A weeping Jankulovska described the five slain police officers as “heroes who gave their lives today for the Republic of Macedonia.”

She added that the “terrorist group,” which had entered Macedonia from an unspecified neighbouring country, planned to “use the current political situation to perform attacks on state institutions.”

Jankulovska said more than 20 members of the armed group had surrendered, but added that the police operation is still ongoing because other attackers have refused to give up.

Jankulovska said some of the attackers had been killed, without specifying the number. She was not able immediately able to confirm whether there were any civilian casualties.

Saturday’s clashes come as Macedonia is grappling with its deepest political crisis since its independence from former Yugoslavia in 1991. The government and the opposition have accused each other of planning to destabilize the country to take or preserve power, and some analysts fear leaders on both sides are ready to provoke ethnic clashes as leverage.

Kumanovo is an ethnically mixed town located about 40 kilometres northeast of the capital Skopje, near the border with Kosovo and Serbia. The region was the center of hostilities between ethnic Albanian rebels and government forces during the ethnic conflict in 2001.

Ethnic Albanians, who make up a quarter of Macedonia’s 2 million people, took up arms in 2001 demanding more rights. The conflict ended after six months with a western-brokered peace deal that granted more rights to the minority group.

Saso Ordanovski, a political analyst, suggested in a debate on local TV station 24 Vesti Saturday that the members of the armed group in Kumanovo were mercenaries.

“Somebody has paid them to change the subject on what is going on at the moment in the country,” Ordanovski said.

The EU delegation in Macedonia appealed for calm and said in a statement it is waiting “for facts to be established by the relevant authorities.”

The U.S Embassy in Skopje issued a statement saying it “deeply regret(s) the loss of life.”

“We are following the situation and are in close contact with the authorities and political leaders. We urge citizens to remain calm and allow the facts to be established,” the embassy said in a statement.

Macedonian President Gjorge Ivanov urgently ended his visit to Russia and travelled back home. The president’s office said he will call for a National Security Council meeting in relation to the latest developments.

Jankulovska, the Interior Minister, said the armed group was “sheltered in the houses of supporters,” but did not give any more details about the organization.

On Friday, thousands of opposition supporters took part in nationwide protests against alleged police brutality in Macedonia. The protests started after opposition leader Zoran Zaev — citing illegally recorded conversations — accused the government of trying to cover up the 2011 police killing of a 22-year-old man.

The recordings are part of a series of wiretaps Zaev has been releasing that he says reveals corruption at the highest level of government in this country of 2 million people, including mismanagement of funds and criminal prosecutions of opponents.

Zaev claims Prime Minister Nikola Gruevski was behind the alleged illegal wiretapping and that he received the material from a source. Gruevski denies wrongdoing, claiming the recordings were fabricated with the help of foreign spies. He has accused Zaev of plotting a coup.

Zaev on Saturday appealed for calm, but had earlier called for a large anti-government protest on May 17.

The junior coalition partner in the conservative government, the ethnic Albanian Democratic Union for Integrations, or DUI, has also expressed concern and appealed for calm. DUI urged people not to respond to provocations.