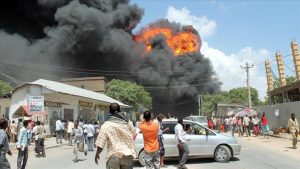 Those familiar with the matter told PREMIUM TIMES Tuesday that the terrorists descended on the troops’ location in large number at about 11:47 a.m and immediately began to shoot sporadically.

The troops, this newspaper understands, fought back gallantly but when the dust of the intense gunfight settled, three soldiers were found to have fallen while two of the terrorists were also found dead.

Two of the dead soldiers were attached to the 311 Artillery Regiment while the third was a personnel of the Nigerian Army Corps of Artillery Administrative Regiment.

PREMIUM TIMES is withholding the names of the fallen soldiers to allow army authorities time to formally contact their families on the incident.

In addition, three Chinese expatriates could not be accounted for. Authorities suspect they were abducted by the terrorists. The identities of the expatriates are unknown at this time.

The attackers also made away with three AK 47 rifles belonging to the fallen soldiers.

The spokesperson for the Nigerian Army, Yerima Muhammed, a brigadier general, said he has yet to be briefed on the incident.

Attacks on law enforcement locations by terrorists have intensified across Nigeria in recent weeks.

At least 19 police officers were killed in the South-South and South-East geopolitical zones of the country in the past two weeks as terrorists launched ferocious attacks on police stations.