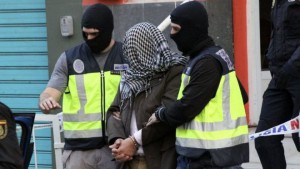 Officials say police in Spain, Belgium and Germany have arrested five people that allegedly formed part of a cell that spread propaganda and sought to recruit militants for the Islamic State armed group.

The Spanish Interior Ministry said the five arrested Wednesday worked for the Islamic State group by spreading information on several internet sites, among them a Facebook page called “Islam en Espanol” (Islam in Spanish), which was managed by two suspects arrested in Belgium and Germany. It said the site had 32,500 followers.

A ministry statement said three of the cell members were arrested in Spain.

It said the group used the sites to encourage jihad attacks, praise the Islamic State armed group and seek recruits.

There were no immediate details on the identities of the five.