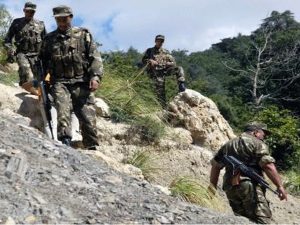 Algerian counter-terrorism troops killed five armed militants and retrieved weapons in a wide-scale operation in the province of Bouira, 110 km east of Algiers, said a statement of the defense ministry according to xinhuanet.com.

The operation has been launched in the dense woods of Laadjiba in Bouira with accurate information of a terrorist group there, said the statement.

The troops clashed with a group of armed men, killing five of them, and retrieved machine guns and ammunition.

The operation is still underway, the statement added.

A few militants affiliated to al-Qaida in the Islamic Maghreb and recently established Islamic State affiliated group of Caliphate Soldiers are still taking refuge in the dense woods in the north of the country, as well as remote desert areas near troubled Libya and Mali.